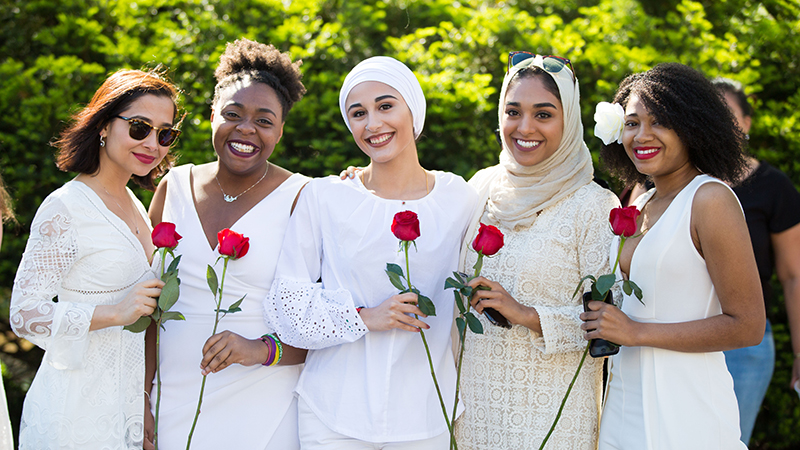 We Are the Stories We Live and Tell

Today, we honor our history and reflect on our connections—as scholars and students, as classmates and community members, as family and friends.

Every year I am struck by the view from this stage.

Generations of Smithies, marching as one.

The Ivy Day Parade—our very own women’s march—is a vivid symbol of the bonds we share as members of this worldwide movement we call Smith.

As a community, we have much to celebrate:

This success is for and about each one of you:

Each of you here today has a shared chapter—a Smith chapter—that is a part of your unique life story.

“The universe is made of stories, not of atoms.” So wrote poet and activist Muriel Rukeyser in her poem, “The Speed of Darkness.”

Rukeyser is speaking to the importance of stories for humanity. Stories do more than reflect our lived experiences, because we are each the author of our stories. Our stories help us shape and reshape who we are, again and again. In so doing, we construct a life.

I have been telling a story for the past 28 years about my daughters and me.

This story takes place when my younger daughter, Kimberly, was in kindergarten, and my older daughter, Kaitlin, was in fourth grade. I was a working single mom, teaching at the University of New Hampshire.

Two years after a separation from their father, I feared I had failed my daughters, despite my efforts to give them what my parents had given me. I worried that they probably felt “less than” their friends with married parents.

One night, the middle school in our town was hosting a musical event—“A Night at the Pops,” it was called—and both of my daughters wanted to attend. I was tired and didn’t have time to change out of my work clothes. Kaitlin remembers vividly my high heels clicking down the school hallway as we approached the ticket booth.

A sign read, “$1 per person or $4 per family.” The woman at the booth looked at us and said, “That will be three dollars.”

Kimberly, my kindergartener, protested, “But we are a family!” I blinked back tears and threw down four dollars, which made Kimberly happy and amused Kaitlin, who understood the irony.

We never felt less than any family ever again.

Looking back, it’s clear to me now that we were at risk of accepting the storyline of others—that we were a broken family. But at that moment, we understood that we got to write our own narrative.

As Tim O’Brien so beautifully explains in his book about his service in Vietnam, The Things They Carried, stories aren’t true unless they feel true. For O’Brien, what he calls “happening truth” is elusive, while “story truth” is real.

What happened at the middle school that night still feels true and real to my daughters and me, no doubt because it reclaimed our identity as a family. We affirm our truth in every retelling.

Psychologist Dan McAdams has theorized that identity essentially consists of narratives—what he calls “a person’s internalized and evolving story of the self.”1

When McAdams interviews people for his research, he begins by asking them to think about their life “as if it were a book—a novel with chapters.” Then he asks for the important stories. McAdams argues that our identity can be mapped through the stories we tell about ourselves.

In essence, we curate our stories. We select the ones that are important—the high points, the low points and the turning points—and we forget the rest. And then we organize them to reflect what McAdams calls an authentic, coherent self. We work to know what is true and real about ourselves.

Regardless of your age or graduation year, Smith is a chapter in your life story. You will always remember the courses that ignited your intellectual passions. The all-nighters with classmates to prep for that midterm. What you did on each and every Mountain Day. The late-night conversations with your friends and housemates that tackled life’s biggest questions: Why are we here? What’s it all about? Is there a God?

As we build our arguments about life’s existential questions, we share the stories that illustrate our beliefs.

I witnessed this sort of chaptered retelling last year at baccalaureate when I heard a graduating senior tell a turning-point story.

As the Smithies know, baccalaureate occurs the Thursday before Commencement and takes place in the chapel. Near the end of the ceremony, the dean of religious life invites students to share their reflections.

One of the first students to speak from the class of 2016 appeared both nervous and determined as she began. It was clear she had something important to say.

When she was 11 years old, she accompanied her mother to a college reunion at another women’s college.

She found herself in awe of her mother’s classmates.

At every activity, the alumnae included her in their conversations. They asked her questions about herself. They were genuinely curious about her interests.

She remembered they were carefree when they spoke, laughed and hugged one another.

Of course, they told her she must attend a women’s college! That made everyone in the chapel smile in recognition, because so many of them had heard the same advice. I think they knew they would be giving other young women this counsel going forward.

The student continued by saying that she grew up wanting to be like the women she had met at her mother’s reunion.

Then her voice broke a little as she confided, “I looked in the mirror this morning and realized: I am like them.”

This student wrote herself into a story, one I suspect many of you share—about confidence, accomplishment and promise.

She came to Smith with the goal of writing an important chapter in her life. She had envisioned that chapter since she was 11 years old. She had succeeded in making their story her story.

We are the stories we live and then tell.

Some of us deploy McAdams’ advice literally. We capture the stories of our lives in a memoir.

Margaret Wurtele ’67, who is celebrating her 50th Smith reunion this weekend, wrote a moving memoir following the tragic loss of her son while he attempted to rescue an injured hiker on Mt. Rainer.

Each story in Margaret’s book, titled Touching the Edge, reads like a parable filled with wisdom.

She begins one of her last chapters by quoting Anaïs Nin.

Alumnae, you are here today because the book of your life includes a chapter on Smith, rich with stories that have withstood the test of time.

You have carried your Smith stories with you into the world, and have built on them to write next chapters.

You have told these stories many times. No doubt, they have shaped and and reshaped your sense of yourself over time.

Seniors, I suspect you already tell lots of Smith stories.

I know you will continue to do so in the years ahead, just like the alumnae here today.

Many of the characters in your book are here today to celebrate with you—your family and friends; your professors; the staff in your houses, the library, the gym, career services, and more.

As you write your life story, remember this: You are the protagonist. You alone. You are the curator of your stories.

Use your stories to make meaning in your life, to find your spiritual path, to make sense of this wondrous world.

And don’t be afraid to write yourself into the stories you envision.

Tell your stories again and again until the story truths emerge. And know you will revisit these truths with every new experience.