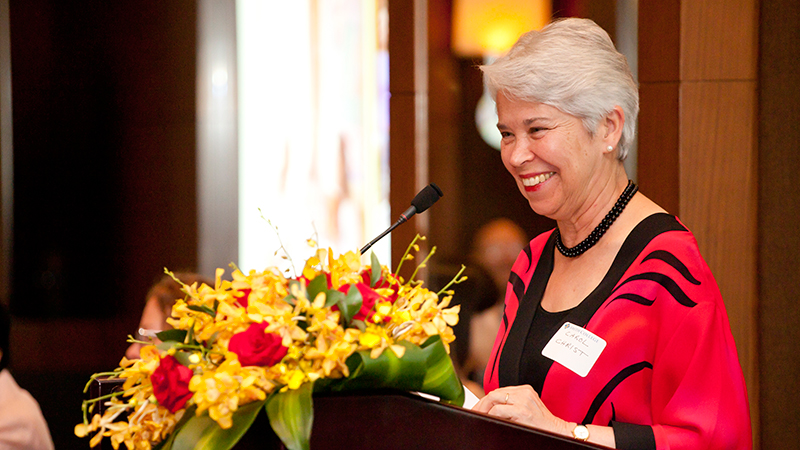 In May and June 2012, Smith College, one of the nation’s original “Seven Sister” colleges and an institution with longstanding ties to Asia, hosted receptions in major cities throughout the continent about its success in educating young women who transform their communities and change the world.

Additionally, President Christ was invited to address the Foreign Correspondents’ Club in Hong Kong, where she discussed women's leadership in public service, and was the opening speaker at the Seven Sisters in China Conference in Guangzhou. She also participated in a panel discussion at the Women’s Education Worldwide conference, an international gathering of women’s college leaders around the world.

“In the past decade, Smith has seen unprecedented growth in applications, with international applicants constituting the fastest growing—and among the most competitive—sector of our pool,” said President Christ. “The college is recognized as the top choice for exceptional young women worldwide.”

Applications from non-U.S. students nearly doubled over the last 15 years, and international students now represent 12 percent of the student body. Increasingly, these high-achieving women are coming to Smith from Asia, Africa, Latin America, the Middle East, and Eastern Europe, spurred by a desire for a challenging, engaging, global education and by a shortage of spaces in competitive universities in rapidly expanding economies and developing countries.

President Christ met with representatives of the Asian Women’s Leadership University, for which Smith is serving as the academic planning partner. Meetings will include tours of prospective campus sites.

In addition to meetings with alumnae, parents, and current and prospective students, President Christ addressed the Foreign Correspondents Club on the topic of women’s leadership in politics and public service.

Women’s Education Worldwide: Gender Issues in Higher Education
Founded by Smith and Mount Holyoke colleges, Women’s Education Worldwide brings together leaders of women’s colleges around the world. At the 2012 conference, President Christ, as part of a panel of Seven Sisters presidents, discussed the recent launch of the Women in Public Service Project, an alliance of leading women’s colleges and the U.S. State Department to double the number of women in public service worldwide by 2050. The 2012 WEW conference took place on the campus of Ginling College, a women’s college actively supported by Smith and its alumnae in the first half of the 20th century.

Seven Sisters in China
President Christ was a featured speaker at this annual gathering of Seven Sisters students, alumnae and prospective students.

President Christ met with alumnae, parents, current and prospective students, and other friends of the college. In addition, she conducted an interview with CCTV, the leading state television network for mainland China, with some 1.2 billion viewers.

This three-day event will bring together some of Smith College’s most distinguished scholars, alumnae experts and friends of the college to recognize the contributions of Smith women to Asian society, celebrate Smith’s long-standing ties to the region and demonstrate the far-reaching impact of women’s education.

Seven Sisters in China is an intercollegiate student-run organization which gathers motivated young women from the “Sisters” liberal arts colleges in the United States and students from top Chinese universities. It aims at actively empowering future women leaders of China through experience sharing, interactions with successful women and establishing a strong network of alumnae support to foster leadership development and personal growth.

A partnership of the U.S. Department of State and Smith, Barnard, Bryn Mawr, Mount Holyoke and Wellesley colleges, the Women in Public Service Project works to advance women’s leadership in politics and governance worldwide. Launched in 2011 with an international colloquium at the State Department, the project’s first Summer Institute will be held in 2012.

Council for American Culture and Education

Smith, along with a number of other leading liberal arts colleges (Carleton, Davidson, Haverford, Harvey Mudd, Middlebury, Pomona, and Swarthmore) will be part of a delegation of admission officers who will spend two weeks in May visiting high schools in major cities in China.