In an essay she wrote 20 years ago, Renata Glowacka Bushko ’86 predicted a doctor of the future— who might better be described as “a distributed Intelligent Caring Creature (ICC)—would have the combined knowledge of the best physicians, pharmacists and nurses from different medical specialties.”

Patients would visit this “doctor” in cyberspace, armed with information from computers embedded in the walls of their homes, sensors on their beds and toothbrushes and even nanocomputers inside their bodies that would provide continuous screening of their physical and mental health. Bushko set the year 2057 for this revolution in medicine—but thanks to the Future of Health Technology Institute, a think tank she founded in 1996, much of what she envisioned is already coming to pass.

“I started with the mission to save lives and reduce suffering,” Bushko says. “It’s as simple and as complicated as that.” A computer science major at Smith, she first encountered the concept of artificial intelligence (AI)—teaching computers to think like humans—in a class with computer science associate professor Jane Hill, when Bushko worked on a project on teaching computers to acquire language. After graduating, she further explored the concept at MIT with one of the founders of AI, Marvin Minsky, who encouraged her to found the Future of Health Technology Institute. Beginning in 1996, the annual institute has explored ways to use artificial intelligence and machine learning to transform health care.

“I took into my hands defining and proposing solutions to the world’s most pressing problems without waiting for an invitation from some big organization. Smith gave me the strength to think this way.”

“We do not take full advantage of all the available technology we have,” Bushko says. Already, she argues, computers and smartphones can take much of what happens in hospitals and doctors’ offices out into the world, giving consumers more control over their own health and at the same time improving medical outcomes. Under her leadership, the institute has published four books and sponsors an annual summit at MIT to share the research of health care luminaries (including pharmacologist Lorraine Gudas ’70, an honoree at the 2013 gathering) who are exploring how AI, robots and other advanced technologies are pushing the frontiers of health care.

Along the way, the summit has helped connect researchers and early-stage companies with government, private and philanthropic funders who can take them to the next level. “Students I picked for presentations years ago are now running successful companies,” says Bushko, whose mind leapfrogs with passionate intensity from idea to idea in conversation; one moment she is theorizing about a new system to crowdsource medical knowledge, the next she is talking about how to create new genetic tests to predict customized cures.

“Twenty years ago, we were really kind of dreaming,” she says. “Every year the progress of technology gives me an almost childlike excitement. When I look back, I am absolutely amazed at what we’ve accomplished.” 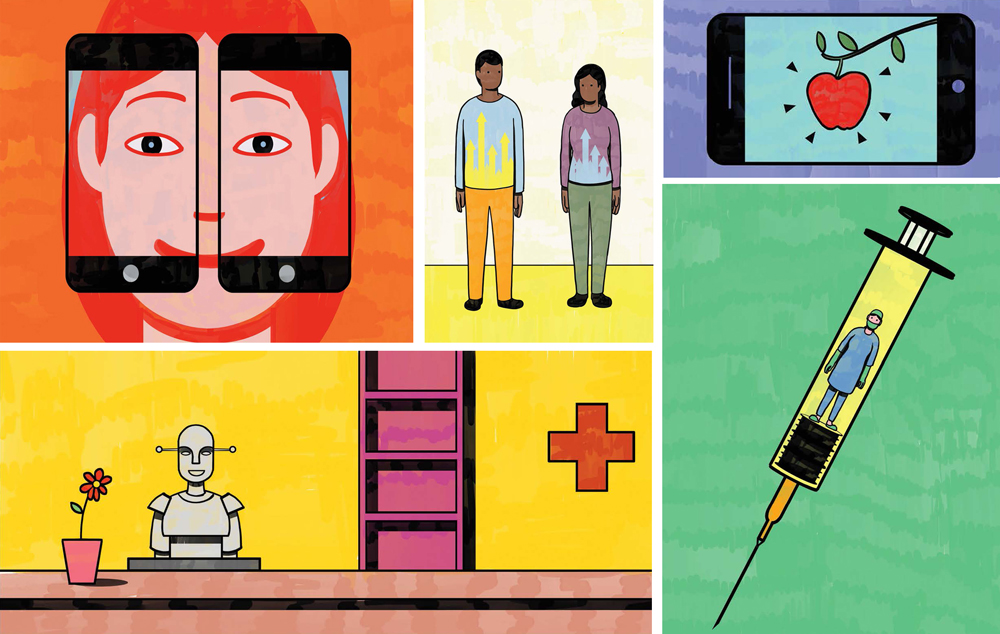 Here, Bushko describes a few of the intriguing technological possibilities presented at her ongoing conferences over the past two decades. Some are still in the realm of dreams, but others are coming soon to a hospital—or a smart phone—near you.

“New research shows that a bad relationship can actually make you sick. We could create sociometers or a chip embedded in our clothing that could tell us how positively or negatively excited we are when we see another person. Over time we could use this information to avoid relationships that are harmful to our health or change them to make them healthier.”

“Food is medicine; if your goal is to prevent disease, then looking at what you eat is probably the biggest return on investment. Some produce in our supermarkets sits so long that it loses much of its nutritional value. Researchers at the MIT Media Lab have developed a smartphone-based spectrometer you could take into the supermarket and apply to an apple, and it would measure the ultraviolet fluorescence from the chlorophyll to tell you how ripe it is and thus deduce its nutritional value. Another new device is able to tell if a food item has gluten. You could even embed technology on an intelligent spoon that could tell you things like how often you eat, the temperature of your food and how much salt is in your soup.”

“Today, a cellphone app can measure the pitch, rate and energy of your voice, how often you communicate and where you go, to make real-time predictions about the state of your mental health and allow for early intervention. Software by MIT professor Alex Pentland and Cogito Corporation uses algorithms to analyze the human voice to help reduce the suicide rate among veterans. With IBM Watson we can develop a care plan for cancer patients. With wearable technology that embeds flexible computers in clothing, you could further measure vital signs, galvanic skin response and body temperature to quantify your emotions and stress level to alert you to problems before they occur.”

“We are on the verge of being able to use humanoid robots as concierges at medical centers—and also as companions for people at home. At the Future of Health Technology Summit in 2004, Georgetown researcher Alexander Libin gave a presentation on robotic cats, map- ping out how people react to them and form bonds, which they do very easily. For elderly people who don’t have a way to care for pets, these robots could help provide an alternative to opioids or other drugs to deal with depression and mental issues. Another researcher, Corinna Lathan, has developed robots, through her company AnthroTronix, that use games to provide therapy to children with learning disabilities.”

“Researchers like David Gracias of Johns Hopkins University are creating microrobots that doctors can inject into your body that could perform autonomous surgery. Guided by a magnetic field, the robots could remove a growth from your stomach or clear a blood clot from your veins, and then ideally, after they do their job, they could dissolve. Even smaller nanorobots, called chromallocytes, could be injected directly into the bloodstream through the capillaries and penetrate the cell wall. They could take out broken chromatic material in a segment of DNA and replace it just like changing a tire—replacing a person’s liver cell by cell without any cutting at all.”

“She has a kind of aura around her; she talks to students as if they are fellow researchers. She inspired the curiosity and the spark in me to investigate and change the world.”

As a professional improv comedian, Pam Victor ’88 is uniquely positioned to make the best out of the COVID-19 quarantine. Victor, founder and president of Happier Valley Comedy, a nonprofit improv comedy theater in western Massachusetts, shares her best advice for taking the techniques of improv comedy and adapting them for real life—especially in stressful times like these.

Smith College has announced its first-ever virtual reunion, to be held Friday through Sunday, May 22 to May 24.

Did you catch the recent @UNICEF takeover? It was by Alliyah Logan '24, a @possefoundation scholar! https://t.co/Jn7kW6E3Jl