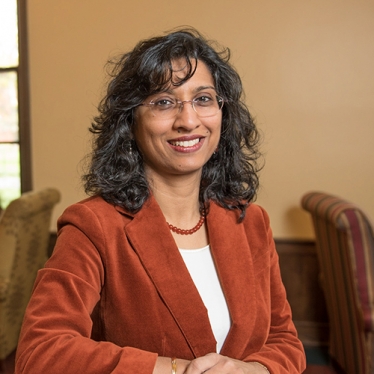 Ambreen Hai specializes in Anglophone postcolonial literature from South Asia, Africa and the Caribbean, and 19th–20th century literature of the British Empire. Additional research and teaching interests include contemporary literary theory, gender and women’s studies, globalization, film adaptation studies, critical humor studies, and literature and ethics. She has published widely on postcolonial and transnational writing, with a focus on South Asia and its diaspora. Her first book, Making Words Matter: The Agency of Colonial and Postcolonial Literature (2009), focuses on the work of Rudyard Kipling, E. M. Forster and Salman Rushdie, and examines how, in the context of colonization, a self-reflexive anxiety about their own agency shapes colonial and postcolonial narratives, and why that anxiety is articulated through the figure of the human body.

Courses taught recently include: ENG 241 The Empire Writes Back: Postcolonial Literature; ENG 277 Postcolonial Women Writers; ENG 229 Turning Novels into Films; ENG 391 Modern South Asian Writers; ENG 199 Methods of Literary Study; and ENG 334 Servants in Literature and Film. She also serves on the executive committees for the Program in the Study of Women and Gender and the South Asia Studies minor. Beyond Smith, she serves on the board of editors for ARIEL (A Review of International English Literature) and Tulsa Studies in Women’s Literatures, and as reader for various scholarly journals.

“Pitfalls of Ambiguity in Contexts of Islamophobia: Mohsin Hamid’s The Reluctant Fundamentalist,” Studies in the Novel, 52.4 (Winter 2020) 434-458. Special issue, “The Postcolonial Novel, Post-9/11.”

“Motherhood and Domestic Servitude in Transnational Women’s Fiction: Thrity Umrigar’s The Space Between Us and Mona Simpson’s My Hollywood.” Contemporary Literature 57.4 (Winter 2016): 500-540.

“Postcolonial Servitude: Interiority and System in Daniyal Mueenuddin’s In Other Rooms, Other Wonders.” ARIEL, A Review of International English Literature 45.3 (July 2014): 33-74.

“Adultery Behind Purdah and the Politics of Indian Muslim Nationalism in Zeenuth Futehally’s Zohra” (In special issue of Modern Fiction Studies on “Women's Fiction, New Modernist Studies, and Feminism”) 59.2 (Summer 2013): 317-345.

“Children of An Other Language: Kipling’s Stories, Interracial Progeny, and Questions of Censorship.” Journal of Commonwealth and Postcolonial Studies 5.2 (Fall 1998): 49-80.