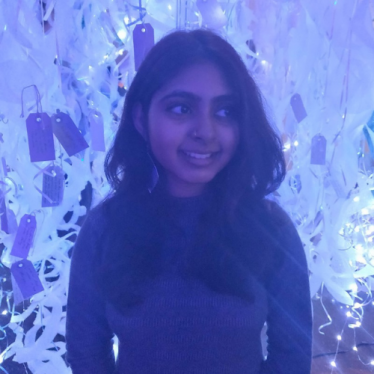 What do you see as a potential future dream job or career?
Research. One of the highlights of my Smith career has been the opportunity to participate in climate change and development economics research in Professor Vis Taraz’s lab. Working in Professor Taraz’s lab opened up for me a world of taking socially relevant questions, and using data and economic theory to understand them. I find the process of taking a seemingly common social occurrence and unraveling it incredibly challenging, yet rewarding. I would love to continue doing such work!

Who is someone in your field you look up to?
I am a huge fan of Abhijeet Banerjee and Esther Duflo’s work on RCTs and poverty reduction.

If another student was considering your major, what would you tell them?
It depends on the elasticity of your interests. In non-economics terms, pick a major that excites you! Economics at Smith provides you with the tools to understand the world around you, gain invaluable problem-solving skills and interact with a diverse body of students and faculty. It’s an incredible department and major. So, take a few economics classes, explore other subject areas, and think of what interests you. If you do what you love, you’ll love what you do!

Economics at Smith provides you with the tools to understand the world around you, gain invaluable problem-solving skills and interact with a diverse body of students and faculty.

Looking back, what do you think started you on the path toward economics?
It was a combination of curiosity and chance. I had never taken an economics class in high school, and I entered Smith thinking I wanted to major in government (which I did) or history. But economics had always intrigued me. So I took the introductory micro and macroeconomics courses my first year. It was really when I took the intermediate economics classes and got to participate in research that I was fully convinced that this was the path for me.

What’s one piece of advice you’d like to share about your time at Smith?
The most important thing my Smith experience has taught me is that there’s nothing more important than your health, both mental and physical. When I started my first year of college I could never have imagined what the next four years would have in store for me. Through all the ups and downs of classes, social life, a pandemic, I’ve learned how unbelievably important it is to prioritize your well-being.

Describe one moment with a professor that particularly sticks with you.
On the day in March of 2020 when we were all told that Smith was going remote because of COVID, I went to meet my economics advisor Professor Roisin O’Sullivan. I remember her asking me how I was feeling about the whole situation. I told her I was unable to go home to India and was a little worried about the entire situation. A few days later, I got an email from Professor O’Sullivan checking in on my situation. It was a simple email, but in those initial moments of confusion and uncertainty, it was a reminder of how supportive and caring the Smith community is. 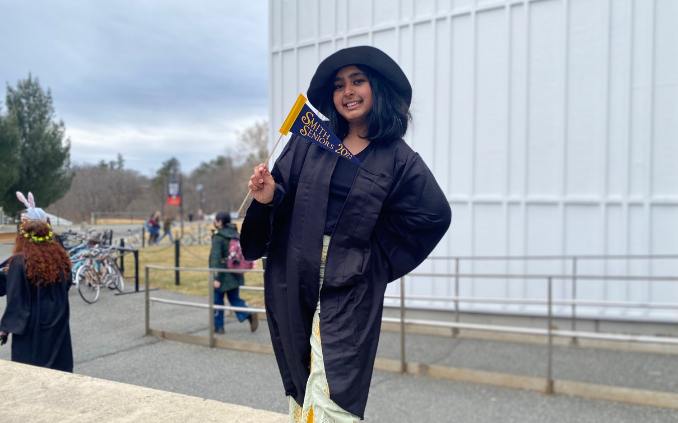 What’s your all-time (big or small) favorite Smith memory?
There are so many to choose from, but the international students’ pre-orientation program (ISP) holds a very special place in my heart. I did ISP a total of five times in my four years at Smith, once as an incoming student and four times as a leader. Being an ISP leader during my sophomore year was a particularly unforgettable experience for me. I found an incredibly tight community of international students in the other leaders of the program. I also got my first taste of leadership at Smith during that week. As a result of ISP, I started sophomore year convinced that Smith was my home away from home.

What was a favorite class outside of your major?
My first-year seminar—Reacting to the Past—holds a special place in my heart. Each of us was assigned a character from history whose goals we had to achieve through the course of the semester. I made some of my closest friends in the class and learned an incredible amount. Plus, I got to wear a cool hat (as part of my character) in class for a whole semester!

What’s one thing you wish you could tell your first-year self about your Smith experience?
It won’t be easy, but it will work out! Your time at Smith is going to have a million ups and downs. There’s going to be a pandemic! Things are not going to go as you planned. But, know that you have an incredibly strong community of Smithies backing you through every step of the way. So, you’ll overcome every challenge and achieve so many of the goals you currently hope to.

How did you select your double major and do you see any intersection between that and your major?
I am a double major in quantitative economics and government. I entered Smith intending to major in government. I have always been interested in global affairs, politics, and the policy world. Government allowed me to explore socio-political issues of personal and intellectual importance to me. I believe that my two majors strongly complement each other. Economics has provided me with the tools to understand the world through an empirical lens, while Government allows me to do the same more qualitative and sociologically. The two fields—economics and government—also look at the world and global problem-solving in different ways, exposing me to different perspectives and ideas. I often read about the same theories in both my economics and government classes but would approach them from different angles. I found this very enriching.

Economics has provided me with the tools to understand the world through an empirical lens, while government allows me to do the same more qualitative and sociologically.

What do you think has been the most “Smithie” thing you’ve done in life so far?
I’ve been vocal about my opinions! From a young age, I’ve always had an opinion on issues. Smith gave me a space where this trait of mine was valued and honed. These four years have empowered me to express myself conscientiously, inform myself about the world around me and be confident in my world views. Oh, and I also got a Smith chop!