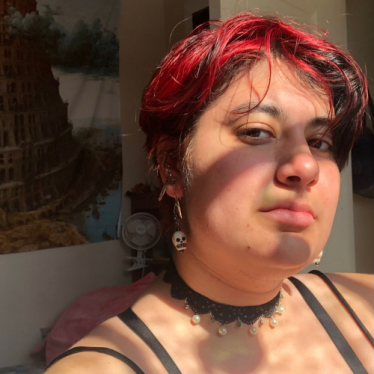 What’s your “Big Dream” for your future?
I want to write something that someone will actually read. Like, either a novel I don’t have time to write or my thesis (which is combining research with creative writing); if one day something I write gets published and is read by even one person who is not a professor or my mom, then I’ll be happy. I’d also like to have several more dogs.

What was one thing that surprised you most about your major?
Something that surprised me about studying religion was how much you have to unlearn before you’re able to actually start learning things. Our perception of religion is fundamentally shaped by our place in a “Western”-ized Americanized Protestant-secularized society—that is, a society steeped in Protestant values and ethics to the extent where we consider them secular—and therefore as a culture our very definition of religion is really very skewed, and basically totally inaccurate to the bigger picture. A lot of the work in college religion classes is just unlearning and re-unlearning and re-re-unlearning everything you thought you knew, even if you thought you knew nothing to begin with. That’s one of the things I love about the field, but it definitely took me by surprise.

Did you ever have trouble deciding on a major? What, ultimately, helped you decide?
I did not have even a second of trouble deciding my major. I definitely didn’t know as a freshman that I would be a religion major––I honestly thought I was going to go into biology of all things. But I realized it’s what I wanted in a kind of lightbulb epiphany moment; I was just like, oh! this is what’s supposed to happen! And then going forward there was no hesitation and no doubt as to whether I was making the right decision. I declared in the second semester of my first year. It seemed obvious, like this is what I was meant to do, not just in college but in real life. That sounds really stupid, but it’s true. I love this field, and I belong in it. Of course, it also helped that in at least half of the religion classes I’ve taken at Smith the professors have provided weekly snacks and/or occasionally bought us lunches and dinners. They keep us well fed, and that’s not nothing.

If you could tell an incoming first-year anything about Smith, what would it be?
I would tell them that the most important and productive thing they could be doing is to have fun with it. Have fun with classes, have fun exploring Noho, have fun roaming Smith. Take classes that are interesting to you; for the time being, ignore any concept of majors, ignore graduation requirements, ignore Latin honors. That will all fall into place later. Just take the weirdest or most exciting classes you can find. Go on adventures to Hampshire Mall with friends. Visit the gardens, take a hike. Don’t worry about the future or majors or what you should be doing. Also, and this one’s really crucial—sleep is more important than grades or assignments or literally anything else. I know that’s antithetical to Smith culture, but I’m telling you, prioritize sleep.

Sleep is more important than grades or assignments or literally anything else. I know that’s antithetical to Smith culture, but I’m telling you, prioritize sleep.

What do you think has been the most “Smithie” thing you’ve done in life so far?
I mean, there’s a lot of things I could name, but I think a strong contender for most Smithie thing I do regularly is when me and my best friends have hair-dying parties, where we all sit in a circle in my friends’ room and cut and dye our hair and watch old horror films or drag races. There are other things, but yeah. I don’t think it gets much Smithier than that.

Bonus question: Why is there a skull on your head in the pictures you included?
That was the hat I put together for Rally Day! It’s a nod to my thesis, which has to do with death and underworld journeys. I’m very proud of the engineering skills that went into getting the skull to stay balanced on my head for three hours, which is why I have taken the liberty to add this question. 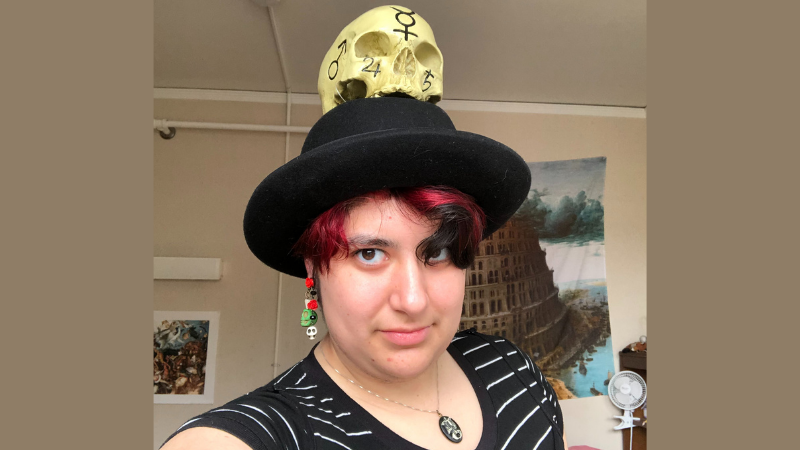 Reason #4 You Should Visit