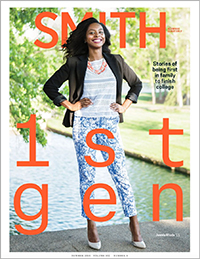 A year ago, on Mother’s Day, I issued a call to action on parental leave, via an op-ed in the Boston Globe. Speaking as a mother, a grandmother and a developmental psychologist, I argued that the United States should join the vast majority of countries with developed economies in legislating more generous policies for employed parents expecting children. Further, these benefits should encompass both parents, not just mothers, because parenting is a shared responsibility, whether society recognizes this or not. With the support of paid parental leave, parents and children thrive.

The op-ed was not only a rallying cry but also a moment to ensure Smith’s own house was in order. Writing about our society’s outdated conceptions of motherhood and caregiving spurred me to scrutinize—and ultimately expand—Smith’s own parental leave policy. I wanted to ensure that our benefits better reflected our values.

Under the college’s new policy, which goes into effect July 1, staff who are the primary caregivers of a newborn or adopted child will have their paid leave extended from eight to 12 weeks following the birth or adoption; paid leave for non-primary caregivers will be extended from one to four weeks. In the case of faculty, the primary-caregiver parent will be excused from teaching, research and administrative duties during the semester a child is born or adopted, and the non-primary-caregiver parent will be excused from teaching one course.

When I announced the enhanced policy, response from staff and faculty alike was immediate, joyous and proud. Whether just starting their families or entering grandparenthood, employees expressed great pride to work for an institution that prioritized work-life balance and children’s positive development.

“As an expectant staff member (due in September), I cannot tell you how much I appreciate this incredible benefit,” one staff member wrote. Another said, “Even though I’m done with that phase of life, it’s good to know that others will be able to devote their time to their children.” A longtime faculty member spoke of the benefits of the new policy to the college at large: “I look forward to being in a community where Smith-affiliated families are supported so they can thrive rather than simply survive the juggling act that is parenting while working, especially during children’s first years.”

Many alumnae have been eager for Smith to take leadership on issues affecting working parents. In a letter responding to this magazine’s “Making Motherhood Work” feature (Winter 2015–16), Abigail Boucher ’02 called out “the abysmal state of paid parental leave and parental support in general in this country.” For her part in the feature, Leah Goeppinger-Levy ’01 laid down a challenge: “How can Smith, as a leading feminist institution, influence change, both by creating a better understanding of reality among its graduates and by leading the fight to create a different kind of work environment?” Changing the college’s own policies is one important step.

There are other signs of progress. San Francisco recently made news by requiring employers to provide six weeks of fully paid leave for new parents when they bear or adopt a child—the first U.S. city to mandate such benefits. The New York state legislature recently enacted legislation that will guarantee three months’ paid family leave per year for both parents, following birth, fostering or adoption.

The business case for parental leave is strong. In the wake of California’s partially paid family leave program, one of the first in the nation, a study by the Center for Economic and Policy Research found positive or no appreciable effects on employee productivity, firm profitability, turnover and morale. President Obama has called out paid parental leave as a national economic priority and a centerpiece of his support for middle-income families.

I know from research and personal experience how important the early weeks are for families and newborns. With respect to the latter, I have witnessed the importance of paid parental leave for my two daughters and their husbands, following the birth of my two grandchildren in the last 14 months. With the college’s new policy as a start, I want Smith to join the movement toward changing the work landscape for new parents—primary caregivers and partners alike. As one faculty member noted, “If not Smith, then who?” I hope we have begun to answer the call of alumnae to create better work environments for parents.