It’s Wednesday and lexicographer Kory Behny Stamper ’96 is explaining that many of her fellow editors at the Merriam-Webster dictionary offices in Springfield, Massachusetts, choose that day to work at home. Still, one could hardly be prepared for the utter silence across the second floor of the solid 1930s red-brick building. Cubicles break up the cavernous space, and here and there a pair of eyes peers over the low walls.

Stamper speaks in whispers as she pulls out drawers of card files, each crammed with pink or green or white note cards marked with penciled citations. This one traces usage, that one records pronunciations. Did you know that Queen Elizabeth II emphasizes the final “d” when she utters the word “mankind”? Now you do, because an editor at Merriam-Webster once cited it.

The card files and hundreds of obscure reference books are digitized now, but the old cabinets and weighty tomes remain in place. Everything in this building—where Stamper and her colleagues research, define and enter English words into dictionaries—seems caught in two worlds. Those old door-stop-size dictionaries may seem like a dusty refuge from contemporary life, but, as Stamper is quick to emphasize, words remain dynamic and contentious; just consider the online phenomenon of trending words after speeches and Twitter wars. “This election cycle and administration have absolutely changed the way people are interacting with the language,” Stamper says. “They’re examining it in a way that we haven’t seen before.”

With her purple hair and occasionally blue language, Stamper herself is a surprise. In person she’s sincere and straightforward. In print, as in her new book, Word by Word: The Secret Life of Dictionaries, and in her Twitter feed, she’s colloquial and wry, with a gift for understated sarcasm (“Someone just wrote to tell me they found a typo in a Latin quote in a footnote of my book, and I am nothing but heart-eyes emoji over here,” she tweeted recently.)

She gives breezy TEDx talks and is a droll contributor to Merriam-Webster’s popular “Ask the Editor” video series. Her take on words is so popular that a Kory Stamper Facebook fan club has more than a thousand members. Among word nerds, Stamper is a rock star.

She describes her job as a calling, one she’s answered for nearly 20 years, putting her at the low end of the longevity scale of Merriam-Webster lexicographers. In Word by Word, she describes the appeal:

There are not many of us plying our trade these days; language may be a growth industry, but dictionaries are not. (When’s the last time you bought a dictionary? I thought so.) And yet whenever I tell people what I do—and after they make me repeat it, because the statement “I write dictionaries” is so unexpected—one of the first things they ask is if we’re hiring. Sit in a room all day, read, ponder the meanings of words—to anyone who even remotely likes words, it sounds like the ideal job.

The day Kory and I met, the world had just made the acquaintance of a new word, one seemingly invented by the president and tweeted out in the middle of the night; by daybreak, “covfefe” had reverberated in endless memes across social media. As if to underscore Stamper’s insistence that English is a living language, with new words added and old ones dropped, the world simply couldn’t stop defining this blank slate of a nonsense word.

We think of English as a fortress to be defended, but a better analogy is to think of English as a child. We love and nurture it into being, and once it gains gross motor skills, it starts going exactly where we don’t want it to go: it heads right to the goddamned electrical sockets. We dress it in fancy clothes and tell it to behave, and it comes home with its underwear on its head and wearing someone else’s socks. … We will never really be the boss of it. And that’s why it flourishes.

Before her book was published in March, Stamper had attained a bit of language infamy as, in her words, “the number one apologist for ‘irregardless,’” a word reviled by English teachers and usage snobs everywhere. After considerable research, Stamper ruled that while its usage remains nonstandard, it holds a nuanced meaning that earns it a place in the dictionary. Defending the word in polite conversation is part of what led her to write a book about the shifting nature of the language. “I want everyone to think English is fun,” she says. And to those who object to “irregardless” as a made-up word, she writes:

All words are made up: Do you think we find them fully formed on the ocean floor or mine for them in some remote part of Wales?

Readers of her book will witness Stamper’s delight in the language. She describes a particular usage as “neatly folded like a retiree’s socks,” and a set of rules as being “like a great linguistic housemother setting curfew.” She didn’t always consider herself a good writer; a high school teacher once jotted at the top of a paper: “an A+ idea corrupted by C- grammar.” And she came to Smith intending to study premed. But in true liberal arts fashion, she strayed into professor Craig Davis’ class on medieval Icelandic family sagas.

From that point on, I was a woman obsessed: I traced words across the rough sword and buckler of Old English, over the sibilant seesaw of Middle English, through the bawdy wink-wink-nudge-nudge of Shakespeare; I picked and chipped at words like “supercilious” until I found the cool, slow-voweled Latin and Greek under them. I discovered that “nice” used to mean “lewd” and “stew” used to mean “whorehouse.” 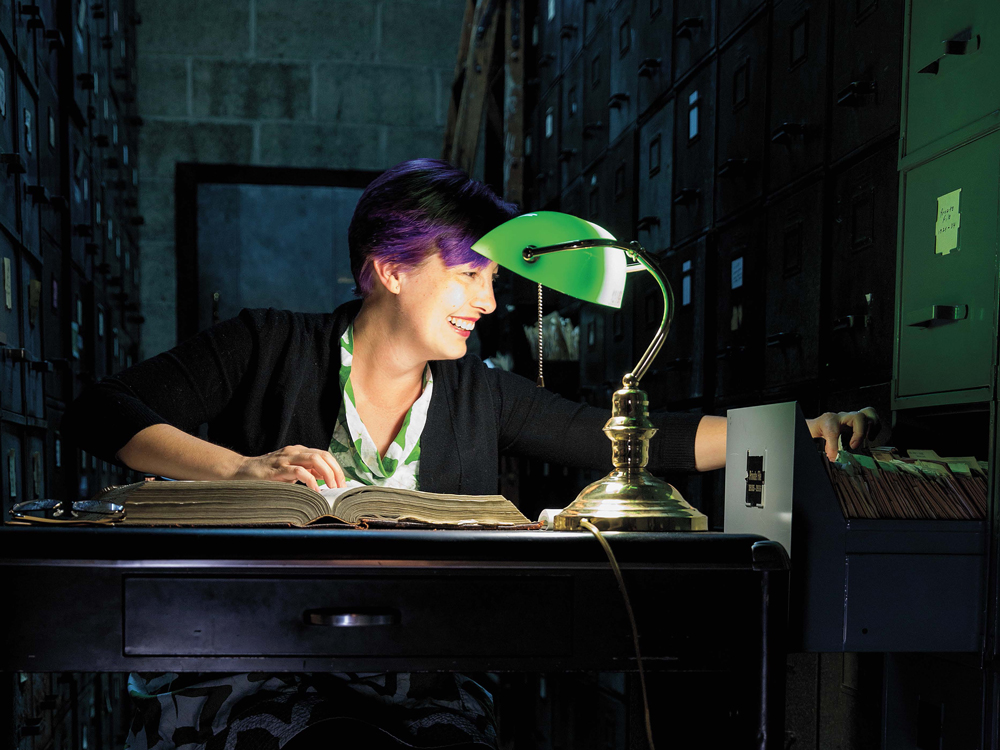 Reference materials fill entire rooms at the Merriam-Webster headquarters in Springfield, Massachusetts. Now that those materials are available online, Kory Behny Stamper ’96 can work from home most days. She lives outside Philadelphia with her husband and two children.

Now she credits her dictionary work with improving her writing. “You get used to hunting around for just the right word,” she says. “It’s the way lexicographers think. You’re always thinking about concision and accuracy.” That precision comes into play when she’s researching and working toward a definition that captures a word’s meaning, though she’s quick to say a definition is rarely perfect. Still, she’s happy with a few of her entries. Like this definition she wrote for the Merriam-Webster Unabridged Dictionary:

mosh: to engage in uninhibited often frenzied activities (such as intentional collision) with others near the stage at a rock concert.

“It works,” she says, “because moshing isn’t unintentional, but it’s not dancing, and it’s not always just slamming into one another.”

If you think that Stamper, with her reputation for tolerating what others might call errors, loves all words equally, you’d be wrong. A few words—like the neologism “bleisure”—do, in fact, annoy her. Why? “‘Bleisure’ sounds like a skin condition,” she says. “I mean, I still have to define them. But my teeth hurt the entire time. Two beers when I get home.”

Influential Professor: English professor Craig Davis. “He’s the one who started me down this dark path. We would have long, spirited discussions about Old English translation. But also, he saw me as a whole human being. All of my professors treated me in this really holistic way. I wasn’t just a potential star student.”

Favorite Memory: Saturday mornings in Hop A, watching the animated X-Men series, drinking coffee and knitting. I think it was the first time I had had comfortable female camaraderie.”