For hours, Jennifer Baskerville-Burrows 88 huddled in a stairwell in Trinity Church Wall Street while the terror of September 11, 2001, rained down right outside. “I was expecting to die,” she says, recalling a memory shared by so many New Yorkers. Yet, she wasn’t panicked or distraught. “I found myself, by God’s grace, at peace.”

Maybe it’s her sense of calm in uncertain times that led the Episcopal Church to choose Baskerville-Burrows last year as the 11th bishop of the Episcopal Diocese of Indianapolis and, notably, its first black woman bishop. “Bishop Jennifer,” as she is called, knows that her race makes her a historic and symbolic choice, but her goal is simply to be the best bishop she can. “I’m both honored and impatient,” she says. “I don’t want to be the only one for long.” At her ordination, the Right Rev. Jeffrey Lee, bishop of Chicago, said Baskerville-Burrows will lead “with courageous grace,” as he noted that she was elected “here at the crossroads of the country … here where the perception has been all too often that this is a place of reactive conservatism.”We talked to Baskerville-Burrows about her goals for the church, her interest in historic church architecture and how the church helps her to be fearless.

You were not raised in the church. How did you come to religion?

When I was a senior in high school on a leadership trip in Washington, D.C., we were given the opportunity to go to church. I went to St. John’s Episcopal Church on Lafayette Square across from the White House by myself and had a conversion experience. … It was almost palpably [like God was saying] “you are home.” It was the most stunning thing I’ve ever experienced.

Did you attend worship services in college?

When I arrived at Smith in the summer of 1984, I found St. John’s Episcopal Church on Elm Street. I stopped in and signed the guest book since nobody was there. I went on my way to unpack and move into the Sessions Annex. The next day, when I came back from orientation, there was a vase of flowers and a welcome message from the church deacon. I showed up in church the next Sunday. It was really wonderful.

After studying architecture at Smith, how did you end up in a formal role in the church?

I went home to New York City to live with a whole bunch of Smith classmates [after graduation]. One Sunday, I said, “Let’s go to the Episcopal church. I studied Trinity Wall Street in my architecture studies but I’ve never been in.” It became my family. I was baptized there. I helped found a young-adult ministry there, sang in the choir, wrote Lenten meditations and taught confirmation classes. One day a priest said, “Have you ever thought about being a priest?” I began to pray about it. The Rev. Arnold Klukas, who was a lecturer in art history at Smith and a priest, put me on the Interfaith Forum on Religion, Art and Architecture, a subdivision of the American Institute of Architects, with people that do art and architecture. I had this revelation at some point that God could call me to be both things: a priest who’s concerned about the built environment. I went to Cornell University for a historic preservation degree, did a thesis on religious property preservation issues and went straight from there to seminary. It was an amazing time.

“We can’t be fearful of other people, fearful of youth, fearful of different, because then we would be holing ourselves up behind locked doors.”

As bishop, do you want to continue that dual focus on preservation and the church?

I’ve got 48 congregations with buildings across half the state of Indiana. Many of them go back to the mid-19th century and some are architecturally significant. Keeping these buildings intact in the ways that a preservation organization might desire can be a financial hardship for churches. Buildings are expensive to maintain and even more so when done to historic preservation standards. There are many ways that I believe churches and preservationists can and should work together for mutual benefit. Now I get to help make that conversation be a much more fruitful one instead of one that raises anxiety and fear.

You have said that the church helps you live fearlessly. What does this mean for you?

There’s so much I could say about this. As Christians, we know that we’re not guaranteed security. Jesus was constantly saying, “Do not fear. Do not be afraid.” We can’t be fearful of other people, fearful of youth, fearful of different, because then we would be holing ourselves up behind locked doors. Surviving the fall of the Twin Towers and 9/11—that was a life-changing moment that brought home to me the sense that if I’m given life to live today, I cannot waste a minute of it being fearful of what’s next.

Churches have been said to be one of the last bastions of de facto segregation. How do you want to address that?

The congregation at our cathedral in Indianapolis is beginning to look a lot like the community. There are Spanish-speaking members there, African Americans, folks from the African continent, Anglos of all stripes, and they worship together. It’s one of those stunningly beautiful things I get to experience. There are a lot of congregations in Indiana that are pretty monolithic, though. If they are reflecting the local demographic, that’s fine. But where there is diversity in the community, then we have to ask ourselves some hard questions. We have these aspirations about being radically welcoming and yet to welcome others means that we have to be willing to be changed. But they elected a black woman bishop, so you can change some things! 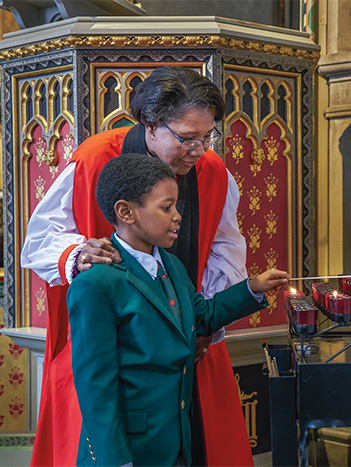 What role do your husband and son play in your work?

My husband, Harrison, is an incredible partner and support. We’re trying to raise our 7-year-old son so that he has his own sense of life in the church and isn’t all wrapped up in being the son of the bishop. But Harrison and Timothy do travel with me when I go on trips to visit churches.

How can the church best address the tension in our country right now?

It’s really hard right now. I totally get it. There are whole families who have broken relationships over politics, and there are people in the church who don’t want to talk because it’s hard. We’ve got to find a way to have these conversations where we grow in relationship even in the midst of our disagreements. If you assume that you’re going to be in a relationship after you come out of a conversation, then you end it very differently. You assume you’re still going to be talking to each other.

Frequent SAQ contributor Lindsey Rowe Roberts ’06 is a freelance journalist, writing for The Washington Post, National Geographic, Luxe and Gray, among others. This interview has been edited and condensed.

This story appears in the Spring 2018 issue of the Smith Alumnae Quarterly.

As viruses spread, so does discrimination against marginalized groups, says psychologist Sherry Wang ’06.

Jes Tom '13 was one of five comedians who spoke to the @nytimes about the joys and frustrations of explaining their gender onstage. "This is like the marginalized artist double-edged sword," they said. https://t.co/jjAYYochlG https://t.co/eyDY3r2TAx