“Look up!” I’m in an elevator that, in a moment, will take me to the bottom level of the National Museum of African American History and Culture in Washington, D.C., to where the museum documents the origins of slavery in America.

Next to me, Beverly Morgan-Welch ’74, the museum’s associate director for external affairs, is urging me to look out the elevator’s huge window as we descend past the years painted in descending order on the wall outside, so it feels as though we’re falling back in time. Inexplicably my heart is in my throat when the elevator stops at the 1400s, where the story begins in Africa. “Even if you think you know the history, the museum presents history in a very different way,” Morgan-Welch says.

As then-President Barack Obama noted during the museum’s triumphant opening ceremony in September 2016, “African American history is not somehow separate from our larger American story. … It is central to the American story.” Maintaining the museum’s high profile is an important part of Morgan-Welch’s job. As of June 30, nearly 2 million visitors had flocked to the dramatic, triple-tiered, bronze-toned museum, prominently sited next to the Washington Monument on the National Mall. For Morgan-Welch, the new museum is a way to reveal the innumerable contributions of African Americans that have been overlooked in history books.

Visitors, who are known to spend six hours or more in the galleries, don’t need to read little labels to learn about those contributions. The museum presents history as a full sensory experience, with sound recordings, 183 videos and numerous interactive displays. Morgan-Welch steps off the elevator and into a darkened hallway; we walk across creaking wooden floors, as if we are in a ship’s hold. Fragments of the oldest sunken slave ship yet to be discovered glow in the darkness, along with child- and adult-size shackles. With a single question, Morgan-Welch dispels the myth of plantation-era assumptions: “Why would you need shackles if they were so docile?” she asks, enumerating examples of resistance both large and small, from secret reading lessons and broken tools to open revolt.

One exhibit after another bears out the courage and self-determination of black people in America— from captive Africans who jumped overboard rather than be subjected to slavery, to the Union soldiers of the Massachusetts 54th Regiment, who refused any pay from the federal government if it wasn’t equal to that of their white brethren.

“I see these statues of black patriots, and the Washington Monument is right over there, and I think, ‘How perfect, how perfect they’re neighbors.’”

Knowledge of these experiences is critical to understanding the development of this country, Morgan-Welch contends. “Erasing that history makes you not only ill-informed about the history, but ill- informed as a republic,” she says. A display called The Paradox of Liberty illustrates the point. A statue of Thomas Jefferson stands beneath his indelible quote from the Declaration of Independence that “all men are created equal.” Yet he’s overshadowed by more than 600 blocks stacked behind him, each one bearing the name of a slave he owned during his lifetime. Surrounding Jefferson are statues of his accomplished African American contemporaries, including mathematician and astronomer Benjamin Banneker and Morgan-Welch’s own favorite, the poet Phillis Wheatley, who was kidnapped into slavery at age 7. “This speaks to me,” Morgan-Welch says. “I see these statues of black patriots, and the Washington Monument is right over there, and I think, ‘How perfect, how perfect they’re neighbors.’”

Now some of those who’ve been left out can see themselves in exhibits at the NMAAHC. For Morgan-Welch, watching a video of the 1965 protest march from Selma to Montgomery, Alabama, sparked memories of her late husband, the minister and civil rights activist Rev. Mark Welch, who drove from divinity school in Chicago to join the march. A small booklet—The Negro Motorist Green-Book, a guide to where black people could sleep and eat in the segregated South—takes her back to her childhood. On their annual road trips to visit family in Georgia, her parents consulted it from Virginia southward whenever they needed options for food or gas.

“So much of this is very personal, but it isn’t just me—it’s everyone,” she says, noting the museum guard whose uncle sang with the doo-wop group Little Anthony and the Imperials, or a group of French students who wept upon learning that their country had once enslaved sugar workers in Haiti. “They see something and a light shines. It’s illuminating. It puts things in place.” 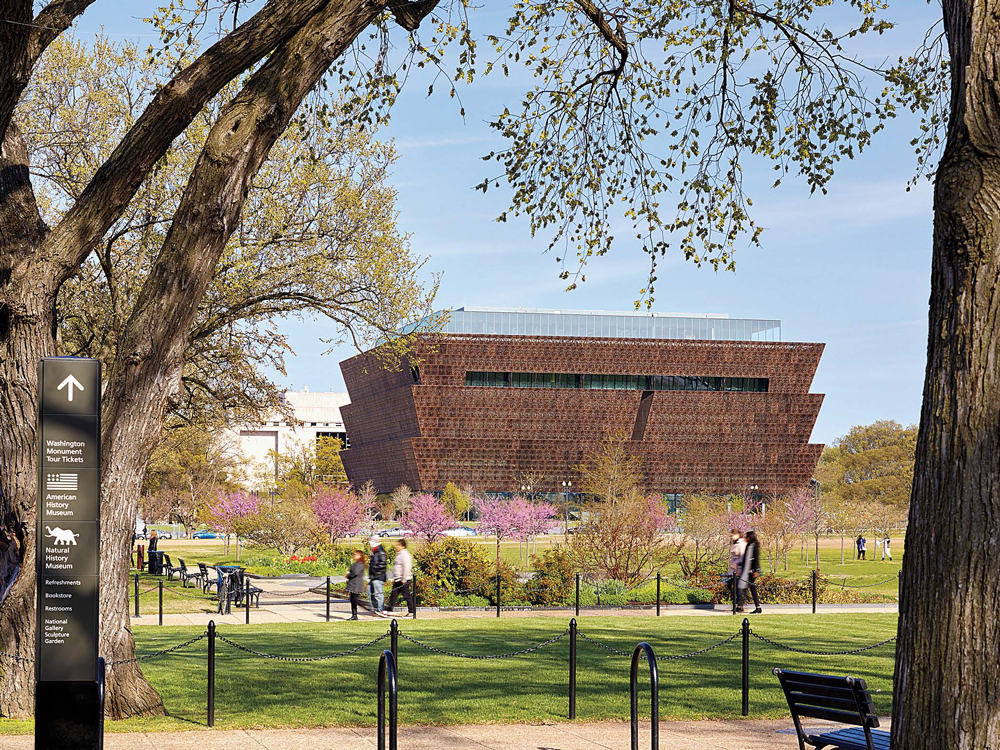 The National Museum of African American History and Culture stands out among the white granite monuments on the National Mall in Washington, D.C.

As associate director for external affairs, Morgan-Welch is in charge of spreading the word about the museum, as she oversees the departments that raise money, plan events, run public affairs and social media, and develop educational and outreach programs. It’s a job that culminates a lifetime of speaking out and bringing attention to issues of race in America.

Morgan-Welch was raised in a family of educators; her parents left Georgia seeking better opportunities in the North. Along the way, she was taught never to allow anyone to put her down—not even the late Smith president Thomas Mendenhall. Morgan-Welch describes a talk he gave to African American first-years in 1970, wherein he admonished them to remember they were guests at Smith, the implication being they should be grateful to have been admitted, regardless of their achievements. “We’re not guests—we are students!” 18-year-old Beverly Morgan called out from her seat. Despite that initial exchange, the Smith community was inspiring and empowering, she says. The class of 1974 had the highest number of black students—66 were enrolled as first-year students, up from 18 two years earlier—at that time. “We were people who were driven, we were people who were overachieving and we were all in the same space,” she marvels nearly 50 years later.

After graduation, Morgan-Welch became the first black assistant dean of admission for Amherst College. She went on to work in corporate philanthropy for the Connecticut Mutual Life Foundation; while there, she was included on an advisory panel of 100 leading black professionals in Hartford to help the city’s Wadsworth Atheneum art museum broaden its audience. In her next job, as the museum’s director of development, she helped found The Amistad Center for Art and Culture, a collection within the museum of 7,000 items related to the African American experience. That work in the 1980s would inform her mission later as the chief executive of the Museum of African American History in Boston and Nantucket from 1999 to 2015. During that time, she was responsible for the $9.5 million restoration of the African Meeting House on Beacon Hill, the oldest extant black church in the United States and the site where William Lloyd Garrison founded the New England Anti-Slavery Society in 1832.

Her career also took her to the Hartford Arts Council, the Bank of Hartford and Raytheon, where she oversaw charitable contributions. She considers her current job—telling the story of African American history and culture on a national and global stage—to be among her highest honors. “This place will elevate all of the African American museums,” she says.

A chilling experience at the museum on May 31 crystallized the critical importance of educating the public on African American history. On that morning, a noose was found in the NMAAHC’s segregation gallery, beside the display of a Ku Klux Klan recruiter’s robe. “The noose is a symbol of the Ku Klux Klan; it’s a symbol of murder,” says Morgan-Welch. “It’s not surprising to me, and it’s not surprising to a black person of a certain age. You feel nonetheless stricken by the divide,” she adds, noting once more that perceptions of African Americans as lesser humans are stubbornly persistent—despite the evidence of 37,000 objects in her museum that prove otherwise.

“The influence black people have on America begins at [the country’s] beginnings, and permeates every part of American life. We just don’t know it,” she says. “When we know it, we will be a different America.”

Lessons Through the Tears

Emotions were running high as a group of Smith faculty and students toured the National Museum of African American History and Culture last spring. They were there to seek inspiration from the museum’s offerings, to see what could potentially be incorporated into disciplines across the Smith curriculum. They learned how difficult it is to be analytical through tears.

“There’s a lot of crying. The first time is not really about having an academic, intellectual experience,” says Alex Seggerman, at the time a lecturer in the art and Middle East studies departments. The group, funded by a college innovation grant, was there as part of the Sherrerd Center for Teaching and Learning.

The museum left some powerful impressions, starting with its dramatic bronze façade, which stands in stark contrast to the white marble monuments surrounding it on the National Mall. “Literally everything [else] is white,” Seggerman says. Nicole Bearden ’19J, an art history major, applauds the way visitors emerge from the subfloors that chronicle black enslavement. “As one climbs higher, the horror is gradually replaced,” she says. “[African Americans] took the nothing they were handed, and turned it into a rich culture. … At the pinnacle of the museum are galleries … showcasing the writers, dancers, artists, actors, athletes and musicians who have succeeded in spite of the history below.”

Seggerman, now at Yale, hopes that ideas gleaned from the museum will enrich the Smith curriculum. “Future courses,” she says, “may incorporate African American histories through analyzing the materials, objects and stories at the museum.”—JMS ’91

Favorite Memory: A weekend gathering in the spring of 1970 for black students who’d been accepted into the class of 1974. “Smith did a great thing. They had no idea how powerful it would be,” Morgan-Welch says. “They cherry-picked women who were exceptional in their academic achievements and their extracurriculars.” It didn’t hurt that black men came from everywhere—Dartmouth, Amherst, Yale, even Morehouse—to socialize that weekend. “It was the best party I’ve ever been to in my life!”

Influential Professor: Len Berkman, Anne Hesseltine Hoyt Professor of Theatre. “He had my back no matter what crazy thing I was always up to.

As viruses spread, so does discrimination against marginalized groups, says psychologist Sherry Wang ’06.

Jes Tom '13 was one of five comedians who spoke to the @nytimes about the joys and frustrations of explaining their gender onstage. "This is like the marginalized artist double-edged sword," they said. https://t.co/jjAYYochlG https://t.co/eyDY3r2TAx