“Putting your love out there on a plate.”

That’s how chef Alice Delcourt ’99 describes the moment of vulnerability when her carefully thought-out meals leave the kitchen and are placed in front of diners, whose feedback comes immediately. “You’re afraid that if it goes out and it doesn’t meet people’s expectations, there’s something deeply wrong with you, you know?”

Delcourt and her partner, Danilo Ingannamorte, co-founded Erba Brusca in 2010. They named it for the wild sorrel that flourishes in the water canals around the restaurant. For Delcourt, preparing food is a calling, though it took a while for her to answer it. “It’s not the career I had ever envisioned or was prepared for,” she says, “but I love it.” 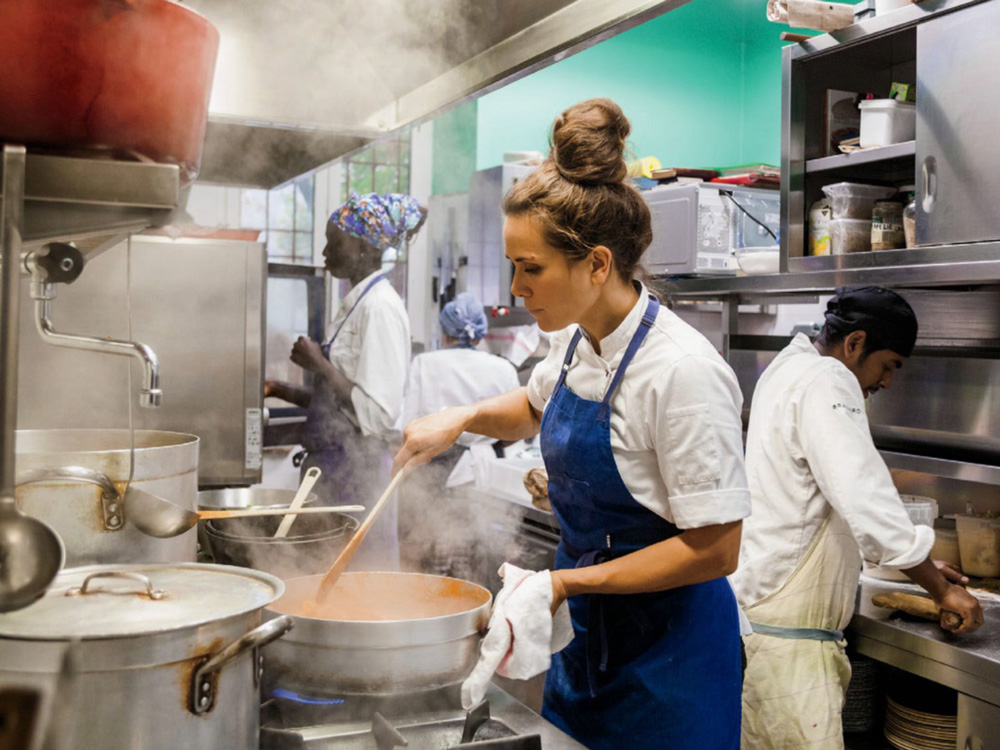 Chef Alice Delcourt ’99 trained at prestigious restaurants before she took the leap and opened her own restaurant in Milan in 2010.

Delcourt, who was home-schooled while growing up in Chicago, spent extended summers with her English grandmother, who had owned a restaurant in southern England. But her true food awakening happened just after her first year at Smith, when her uncle took her on a trip to Bologna, Italy. “We had a coffee, and I was like, ‘What did you order me? What’s in that coffee?’ It was amazing. I thought there was some kind of secret syrup, but there wasn’t. It was just a coffee made perfectly.” The trip gave Delcourt a taste of the ways in which food, when prepared with care, can connect people. “At the table with Italians, they talk about food while they are eating food, and then they talk about what they ate the day before, and what they’re going to eat the next night,” she says. “They’re excited about it—and that’s exciting to me.”

Delcourt’s enthusiasm intensified during her junior year abroad in Florence. Still, when the government/Italian major graduated, she took a job as a legal secretary in a New York law firm. It didn’t last; after two years, she returned to Europe. First to Milan and then to London, where she landed a cooking job at the celebrated Italian restaurant River Café. From there, she worked under two of Milan’s most renowned chefs, Andrea Provenzani and Viviana Varese. It was Varese who inspired Delcourt to follow her instincts in the kitchen. 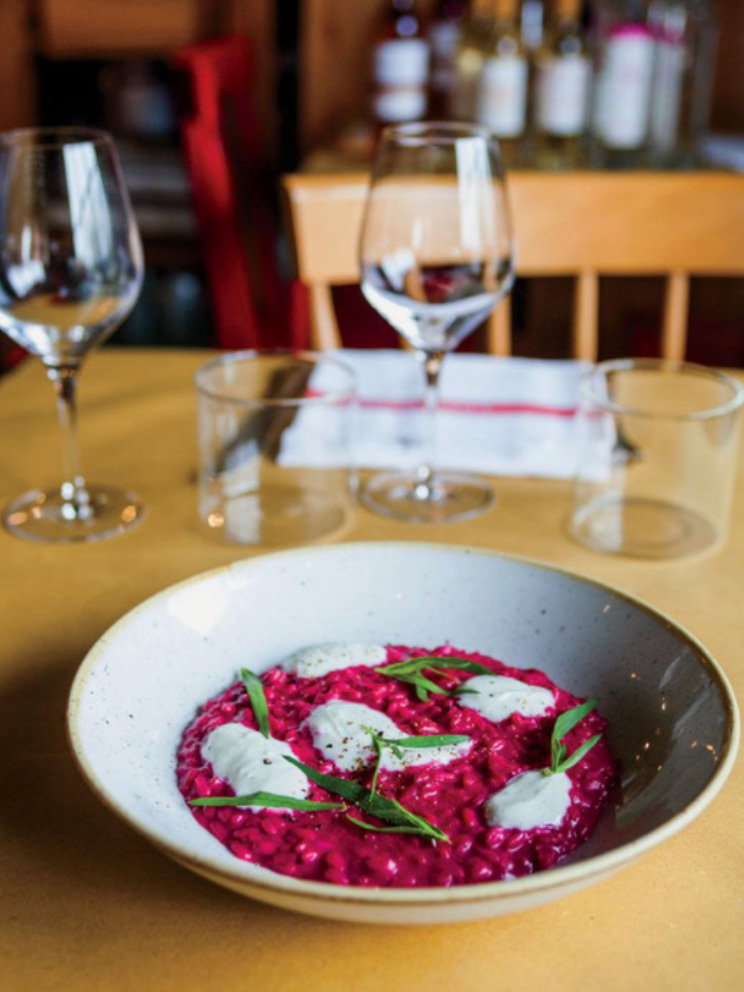 Delcourt changes her menu to suit the season, like offering her colorful beet risotto for fall. She wants to create a place where diners feel comfortable and a part of her restaurant’s community.

Delcourt’s dishes are beautiful, unpretentious and clean on the palate—a modern reflection of the culinary heritage of Northern Italian cuisine that elevates humble fare. “Most of my dishes are structured, so it’s not like a piece of meat and then a tiny side vegetable. Both should be equal and complementary,” she says. “My hope is that [diners] discover they actually like a vegetable they thought they hated.”

Delcourt favors foods of the season, sourcing herbs, greens and vegetables straight from the restaurant’s patio garden. Erba Brusca’s summer menu featured a salty-sweet watermelon salad made with Salva Cremasco cheese, purslane, basil, pickled onions and watermelon rind; earthy burntonion risotto with lemon zest and thyme; tender pigeon breast accompanied by pickled white beets, rhubarb and tart plums; and the restaurant’s signature dish of plump, succulent vongole (clams) and black truffles. For fall, her menu included a terrine of lamb accompanied by pickled red cabbage and a cream of horseradish and apples, risotto with anchovies and lemon, and roastedcauliflower seasoned with turmeric and dukkah and topped with a poached egg. 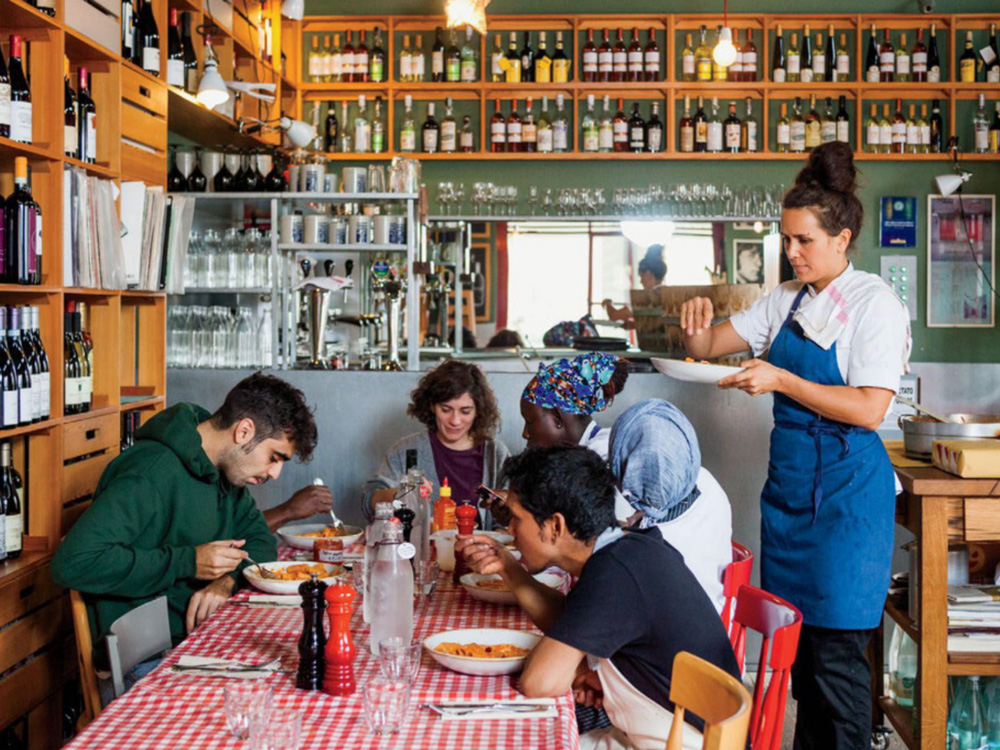 At noon, the Erba Brusca staff sits down for a family-style lunch before the restaurant opens to the public.

The dining room at Erba Brusca is outfitted with rustic wooden tables and floor-to-ceiling shelves chock-full of wine bottles and cookbooks, every aspect inviting the diner to the table. It’s the antithesis, Delcourt says, of the heightened gastronomic focus of a Michelin-starred meal. “What I would like is for people to think what they are eating is delicious, and then have this great conversation with their friends,” she says. “I want them to love the whole experience—where they’re sitting, the wine they’re drinking—and to feel comfortable.”

Delcourt also aims to increase awareness of the human and natural resources that go into growing and making food. “As soon as the restaurateur stops caring completely—you don’t care about who’s made it, you make no relationships with the people who are producing [or] selling—then all those relationships in the community break down,” she says. This commitment to sustainability—in resources, relationships and ingredients—is reflected in her decision to close for two full days a week so staff can rest and recharge. It also shows in her attention to electricity and water usage and her choice to serve filtered tap water instead of bottled. Most important, it is reflected in the food itself: Delcourt sources the majority of her ingredients from within a 30-mile radius. “Ninety-five percent of the vegetables we get are from guys up the metro line on the other side of town. Plus, in season, we get a bit more from our garden.” Her meat supplier in Bologna works with local hunters who cull animals as part of population control in the national parks. She also refuses to serve beef and any fish that is known to be overharvested. 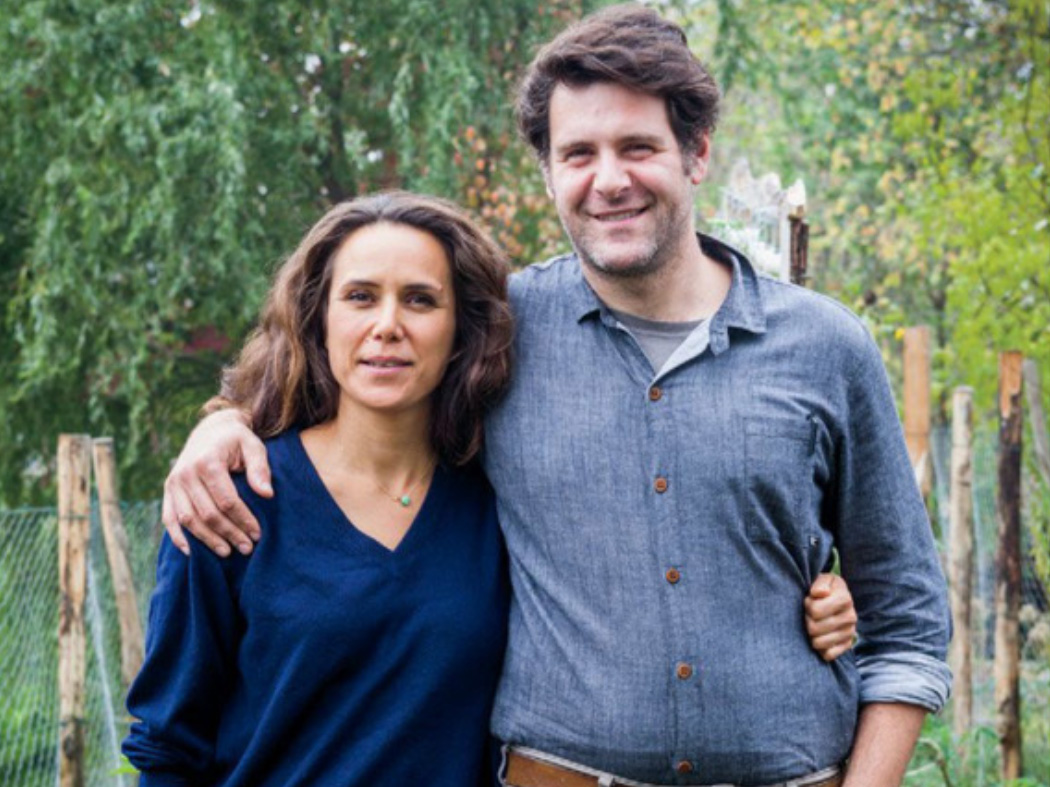 Delcourt and her partner, Danilo Ingannamorte, run the restaurant, keep a garden and raise twin boys together.

Erba Brusca is an integral—and intertwined—part of Delcourt’s life. Her personal relationship with partner Danilo Ingannamorte grew as they created the restaurant. Ingannamorte started off as the sommelier and manager but has, Delcourt says, “slowly morphed into a farmer, salame maker, carpenter and a fixer who also deals with most of the paperwork and rottura di cazzo [politely translated as ‘hassles’].” Until about six months ago, their 3-year-old twin boys spent their days in the restaurant and the adjacent studio apartment, which couple rents in addition to their own apartment closer to the city center. “The babysitter would come here so I could nurse every three hours,” she says. Once the boys were put to bed, Delcourt would watch them on the baby monitor while cooking. “It was special to be able to integrate our family in the restaurant.”

Combining restaurant work with motherhood has been exhausting, but Delcourt was determined. “It was huge for me to come back to work—I really wanted to—but it’s really hard because, all of a sudden, you feel like you’re not 100 percent at anything,” she says. “Being a woman in this field is incredibly challenging. I realize now that the reality of being at Smith—a place that proves the capacity of women to grow, create and succeed all by themselves—helps carry me through moments of self-doubt, discouragement and frustration.”

Delcourt wants her customers to feel they are also part of the Erba Brusca family. “We’re trying to create a kind of community in our restaurant. People come here to celebrate, to commiserate. … They feel they can do that here, through our food,” she says. “I hope they are satisfied and happy and will want to return again.”

Simran Sethi ’92 is a Smith Medal recipient and author of Bread, Wine, Chocolate: The Slow Loss of Foods We Love (HarperCollins), named by Smithsonian Magazine as one of the best food books of 2016.

This story appears in the Winter 2017-18 issue of the Smith Alumnae Quarterly.

Favorite Smith Memory: “Drinking beer from a boot after my first try on the rugby field. (That feels wrong and very anti-intellectual to print!)”