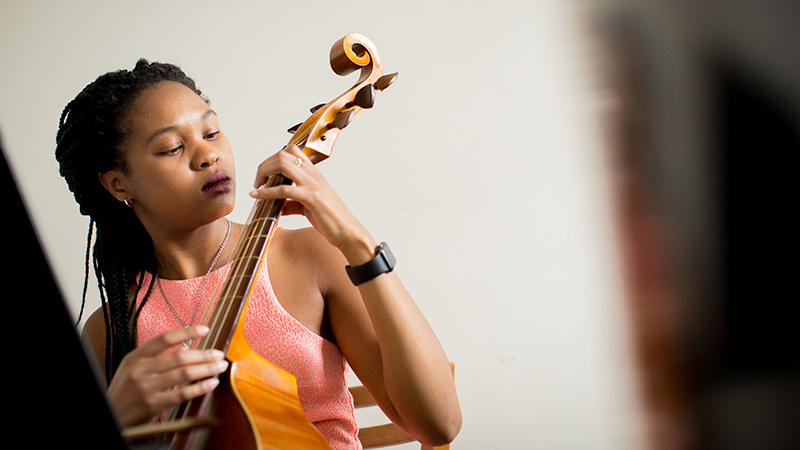 Admission to individual lessons, chamber music, and some ensembles is determined by audition during fall semester orientation period and the first days of the semester. Students are accepted on the basis of musicianship, competence and potential. With the exception of voice, some prior experience is assumed. There is a lesson fee which is waived for music majors and minors. Information and sign-up sheets for auditions may be found at the Music Department office.

When no instructor for a particular instrument is available at Smith College, every effort is made to provide students with qualified instructors from the Five College community. Such arrangements may require Smith students to travel to other campuses within the Five College system. Students wishing to study performance with Five College faculty must obtain departmental approval.

Individual voice or instrument performance courses consist of weekly private lessons, with specific expectations determined by each instructor. Lessons require a yearlong commitment and are normally taken in addition to a regular course load. Two such courses may only be taken concurrently with departmental approval. (This restriction does not apply to enrollment in MUS 901 or MUS 903, or to participation in large ensembles for credit.)

All performance students are encouraged to study music in the classroom. Non-majors and non-minors should talk with their instructors about which courses best complement their interests.

No more than 24 credits in performance may be counted toward graduation. This includes participation in the various large ensembles described below.

All large ensembles are graded on an S/U basis.

MUS 914Y First year of study
This is a full-year course. {8} {A} Credits: 2. Normally offered each academic year

MUS 930Y Third and fourth years of study
Prerequisite: MUS 924Y. This is a full-year course. {8} {A} Credits: 2. Normally offered each academic year

MUS 901 Chamber Music
Weekly group meetings for exploration and coaching of varied repertory for duos and small ensembles. Open to instrumental students by permission of instructors. May be repeated for credit. {8} {A} Credits: 1. Normally offered both fall and spring semesters

MUS 903 Conducting
Introduction to the art of conducting. This course examines philosophical and practical aspects of the modern conductor’s role. Topics include a musical gestural vocabulary, baton technique and score study/internalization of the printed page. Prior music performance experience and study of Western music theory is highly recommended; instructor permission required. May be repeated for credit. {8} {A} Credits: 2. Normally offered in alternate years

All students are encouraged to join a choral ensemble. The dynamic Smith College Glee Club performs annually at Commencement and Family Weekends, Montage, Autumn Serenade, Christmas Vespers, and at various college events including Opening Convocation, Otelia Cromwell Day and Rally Day. The Glee Club selects music from a diverse repertoire, including major works for treble voices, jazz, contemporary, and folk music of the U.S. and from international traditions. Every spring, glee clubs from such universities as Harvard, Rutgers, Cornell, Michigan and Virginia come to campus to collaborate on a major work. Recent performances have included the Mozart Requiem, Orff’s Carmina Burana and Brahms’ Ein Deutsches Requiem. Auditions for Glee Club are normally held during orientation and the first two weeks of classes in both semesters.

Members of the Glee Club are eligible to audition for the highly selective Smith College Chamber Singers. The internationally known Chamber Singers have performed widely since 1951. Touring every two years, the program provides financial assistance enabling all members to tour regardless of financial need. Auditions for Chamber Singers are held after Glee Club auditions have concluded.

Students who would like to try singing in a choir for the first time should schedule an interview with the instructor of Introduction to Choral Singing, a course that introduces students to the world of choral music.

Introduction to Choral Singing, Glee Club and Chamber Singers meet on Mondays and/or Wednesdays in the late afternoon.

MUS 954 Smith College Orchestra
A symphony orchestra open to Smith and Five College students, and members of the community. The orchestra gives at least one concert each semester and performs at annual events such as Family Weekend and Christmas vespers. Rehearsals on Tuesday evenings. {8} {A} Credits: 1; normally offered both fall and spring semesters

MUS 955 Smith College Javanese Gamelan Ensemble
One rehearsal per week; one concert per semester. Open (subject to space) to Smith and Five College students, faculty and staff. No prior experience necessary. Rehearsals on Wednesday evenings. {8} {A} Credits: 1; normally offered both fall and spring semesters

MUS 956 Smith College Jazz Ensemble
The jazz ensemble rehearses once per week on Wednesday evenings 7–9 p.m. in Earle Recital Hall, and performs at least one concert per semester. Favoring traditional big band instrumentation, and performing a variety of jazz styles, the ensemble is open to Smith and Five College students, as well as and members of the community (space permitting, and by permission of the instructor) with all levels of music training. Prior jazz experience is recommended but not required. {8} {A} Credits: 1; normally offered both fall and spring semesters

MUS 957 Smith College Wind Ensemble
One rehearsal per week; at least one concert per semester. Open to Smith and Five College students, faculty, staff and members of the community with prior instrumental experience.{8} {A} Credits: 1; normally offered both fall and spring semesters

MUS 958 Smith College Irish Music Ensemble: The Wailing Banshees
One rehearsal per week; at least one concert per semester. Open by audition or permission of the director to Smith and Five College students, faculty and staff, and members of the community. {8} {A} Credits: 1; normally offered both fall and spring semesters

MUS 960 Chinese Music Ensemble
This course introduces students to the modern Chinese ensemble and a variety of Chinese music styles. The course is designed to be hands-on and experiential, encouraging students to explore the basic ideas of Chinese music and culture through weekly rehearsals, practices, and performances. One rehearsal per week; at least one concert per semester. Open by audition or permission of the director. S/U only. Limited to 18. {A}