Exploring Reproductive Technology, or, 65 Half Siblings 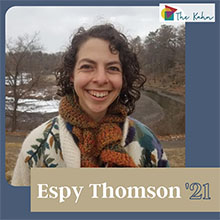 Espy Thomson ’21 has 65 half siblings, that she knows of.

Thomson recently documented her life growing up with the knowledge that she was the child of a sperm donor in a recent essay for the Amplify Competition, a forum for Smith students’ stories sponsored by the Wurtele Center for Leadership. Thomson’s piece won a People’s Choice award.

An environmental science and policy major and a fellow in this year’s Kahn Institute project Technophilia/Technoskepticism, Thomson has been spending the first half of her final semester researching the reproductive technology industry. As part of her research, she just finished interviewing some of her half-siblings, fellow offspring of her sperm donor. Her next step, she describes, is to determine how to interpret these interviews, in addition to continuing to document her own personal experiences of conducting this research.

When asked why she applied for a Kahn fellowship, Thomson recalled that, despite her fears, a professor encouraged her to apply last year. She was ready to undertake this type of independent research work, the professor told her.

“I began to really like the idea of doing an independent year-long research project,” said Thomson, “so I decided to apply.”

Weekly Kahn project seminars have continued online throughout this academic year, devoid of the group meals that accompany projects during a typical year. “I am really sad to not have the dinners at the Kahn,” said Thomson. “However, we have still been able to meet, learn things, and do our work remotely.”

In addition to her Kahn fellowship, Thomson is taking three classes and some special studies, to allow time to invest in her Kahn research.

“The Kahn can be however much time you want to put into it,” she explained. “Some weeks, I’ve had too much homework to do anything, and some I have done more than the expected 10 hours a week. You are in charge of your time, which is really cool. It can also be daunting though, so I recommend connecting with other Kahn fellows to create working schedules together.”

Her favorite part of working at the Kahn has been the enthusiasm and energy she has experienced as part of the project group of 13 scholars.

“Alex [Keller, director of the Kahn Institute] is just a bright spot of energy and available anytime for questions,” said Thomson. “I have gotten to learn and explore topics that I would not have been able to (at least in the same depth) without the Kahn’s support.”