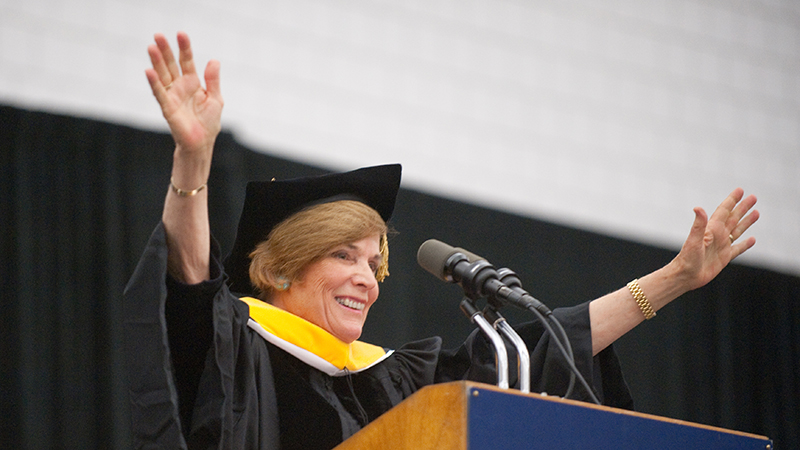 Sylvia Earle, the undersea explorer dubbed a “Living Legend” by the Library of Congress, was the speaker at Smith College’s 133rd commencement ceremony on Sunday, May 15, 2011.

Last night I was thrilled to see the illuminated campus. It reminded me of diving in the deep sea, seeing the flickering lights, because, when you think about it, light penetrates into the ocean to only a few hundred feet, 1,000 feet at the most. Below that, all of the living world — and it’s most of the living world — lives in the dark all the time — not just Washington, D.C.

Actually it’s not dark out there, because those creatures have lights of their own — little lanterns, spots, speckles that flash, sparkle and glow, squids that jet ink — creatures that really do illuminate most of the living world from the surface to the greatest depths seven miles down. You, the Class of 2011, are bringing light to all the world 24/7.

You have managed, somehow, to come along at what may be the most important time in all of history — if what you have in mind is making a difference for the future of the world.

You are armed with unprecedented knowledge not possible to have when Smith College opened in 1871.

That was just a year before the first global ocean research expedition began, the four-year voyage of Her Majesty’s ship, Challenger, an expedition that marked the beginning of the science of oceanography.

I sometimes wonder what would impress scientists from Challenger the most if they could come visit us in the 21st century.

Would it be satellites gathering data about currents and tides, the ability to pinpoint where in the ocean you are temperature and salinity or astronauts walking on the moon? Would they be dazzled by cell phones, television, iPads, iPods, iPhones, Google Earth — the ability to hold the whole world in your hands and dive into Google Ocean and explore vicariously even the deepest sea, seven miles down.

Surely, these things would amaze them. But all things considered, after all, they’re all guys, they would probably be most startled to see women — scientists, ship captains, astronauts — driving submarines, ships and flying those amazing spacecraft!

Yes, not all the changes in the 20th century have been negative.

When I was chief scientist at NOAA in the early 1990s, one of the agency’s lawyers told me that his seven-year-old son, Kenny, loved a book that he had been given about the adventures of Sylvia Earle.

There were pictures of this woman diving with whales, living in an underwater laboratory, exploring the deep sea, and he had his dad read this book over and over, night after night.

Just the night before, my friend said, Kenny looked at his dad wistfully and asked, “Dad, when I grow up...I mean...well, can boys get to do things like this, too?”

I can imagine boys of today, after three women Secretary of State wondering whether or not it is a career they, too, might aspire to, or if it is something women are most suited for.

Well, it seems to me that birds, whales, fish, elephants and other species have figured out things we have been a little slow to recognize. That moving city of dolphins — side-by-side, males and females.

As a young female myself in 1964, I was invited to go aboard a research vessel to explore the waters of the Indian Ocean. Not until all the papers were signed did someone notice that I would be the only woman among 70 men. But the Mombasa Daily Times noticed with a headline published near the time of our departure: “Sylvia Sails Away With Seventy Men — But She Expects No Problems.”

Actually, the biggest problem was one that we all shared — how to explore the vast system that generates most of the oxygen, shapes planetary chemistry, climate, weather, temperature, and much more — armed with a pathetic array of nets, hooks and other tools.

Even now, less than five percent of the ocean has been seen, let alone explored or even mapped with the same precision we have mapped the land, the moon, Mars or Jupiter.

But we know enough to know that the ocean is in trouble, and if it is, we are.

The ocean is the cornerstone of Earth’s life support system. Take it away and earth would look a lot like Mars — not a friendly place for seven billion people.

During the years I have spent splashing around in the ocean, I have met some smart creatures — dolphins, whales, octopuses, squid and numerous wise old fish.

When I began diving in 1953, I was warned to beware of the sharks. “There are man-eaters out there!” I worried for a while, then realized I did not have to worry about MAN-eaters. I don’t qualify!

Now, though, there is cause for concern about man- (and woman-) eating sharks. Nearly 100 million were killed last year, largely owing to a growing luxury taste for shark fin soup.

From a time when it was thought that the only good shark was a dead shark, there now is concern that no live sharks will survive to swim in future oceans. After half a century, only about 10 percent remain. True, too, of tunas, swordfish, cod, groupers, snappers and lots of others.

A fish common on menus these days, orange roughy, currently $8.99 a pound in a lucky supermarket where I live in California, may live more than two centuries — long enough to have experienced the effects of the industrial revolution and the consequences of ingenious and enormously destructive fishing practices unlike anything creatures in the ocean have experienced in hundreds of millions of years.

We live in a time of political, social, economic, technological and, especially, environmental change.

Since the beginning of the 20th century, ancient forests intact for millennia have been logged. Our fellow vertebrates — mammals, reptiles, amphibians, birds and fish on the land, in lakes, rivers, streams and the sea — have been reduced to a fraction of their former abundance, a blink of a geologist’s eye.

Entire ecosystems — mangrove forests, sea grass meadows and coral reefs, both in shallow tropical seas and in the deep ocean beyond, have been consumed for short term use by one species — that would be us — at the cost of thousands of others.

The burning of forests and fossil fuels have led to increased carbon dioxide in the atmosphere to levels unprecedented in the history of the planet with unprecedented consequences — global warming, climate change, sea level rise, and now, acidification of the ocean.

Much of the change is driven by our numbers — about one billion in 1800, two billion by the 1930s, four billion by 1980, and now touching seven billion, with more of us on the way to 10 billion, and more perhaps in your lifetime.

There is a cost to our apparent prosperity and we are just beginning to be able to recognize what that means.

A young woman at MIT, Penny Chisholm, as a scientist has discovered some important clues. She discovered the existence of a tiny creature in the ocean, a blue-green bacteria Prochlorococcus. It will be on a T-shirt someday: “Have you thanked Prochlorococcus today?” Because that little guy, maybe girl, microbe, contributes one of every five breaths we take — 20 percent of our oxygen comes from that one microbe alone. We didn’t know it existed when I was a kid. What else is out there that we don’t know about? What else is there that you will discover?

The good news is that for the first time in history we have data-gathering satellites and astronauts in the sky sharing their view of this miraculous speck of blue in an inhospitable universe.

The good news is that we [you] can now have data to connect the dots, measure the consequences of our actions, predict future outcomes — with computer technologies, instant connections among brainy people all over the globe. That did not exist when I was a child.

The good news is that you have come along for the first time in history when enough is known about our dependence on the natural world to be able to take actions that can stem the losses, reverse the trends and set us on an enduring course of compatibility with the natural systems that sustain us.

Half the coral reefs are still intact. We don’t have to try to invent them from scratch.

There are still some intact, ancient forests — about five percent in this country.

There are still sharks — and tunas — and turtles — they aren’t all gone, yet.

Protect the natural systems as if your life depends on it because it does! Our lives do depend on making peace with nature.

In the 1990s I served on the international whaling commission — four years — and realized I was likely to be the only person out of hundreds who were deciding the fate of whales, who had ever met with whales face to face, on their own terms, nose to nose, underwater, and yet we were determining how many and what kind could live or die. We here are and should be concerned about women’s rights, children’s rights, minority rights, about rights of various parts of human society. We also need to be concerned about the rights of nature, justice for nature, and the other category of those unrepresented at the table where decisions are being made — the real stakeholders we should care most about — those who have yet to be born who are not among those who are now voting.

Imagine, if you will, that the Class of 2111 from Smith could magically arrive here to tell us what the world will be like if we continue doing business as usual. Or imagine if you could go back to 1911 to visit your predecessors to give them guidance on how to shape the world so we would have more to deal with and better hope going forward.

You, class of 2011, are among the luckiest people ever to have come along in time. As Jackson Browne wrote in a recent song, “If I could be anywhere in time, it would be now.”

Never before have we understood that we have to take care of the natural world that takes care of us. Never again will there be as good a chance as there is right now to do what it takes to make peace with nature — a fundamental step toward making peace among ourselves.

We have a once and never more chance to explore the Arctic before exploiting the arctic — the drilling, trawling and mining have not yet destroyed the only chance we’ll ever have to be wise about this pristine sea. Heretofore protected because we couldn’t get to it. It’s the last chance to stop killing tuna, oysters in Chesapeake Bay. The next 10 years may be the most important in the next 10 thousand years.

I personally — I hope you are too — I am a “hopeaholic.” I confess. So is Jane Goodall. She gives four big reasons to hope: the human mind, our ability to craft solutions, coupled with the human spirit, which is perhaps unique on the planet, third the resilience of nature that gives us hope. We still have reason to think we can turn things around; the fourth thing is her belief and mine too in the youth of today who don’t know what they can’t do who don’t realize that there are things ”impossible” to change. We have the power. You have the power.

And you, lucky you, are here to fly the aircraft, write the songs, dive the subs, find the cures, run the companies, lead this country, lead this world to a better, more prosperous future for all of life on earth — ourselves, very much included.

Take a deep breath and dive right in.