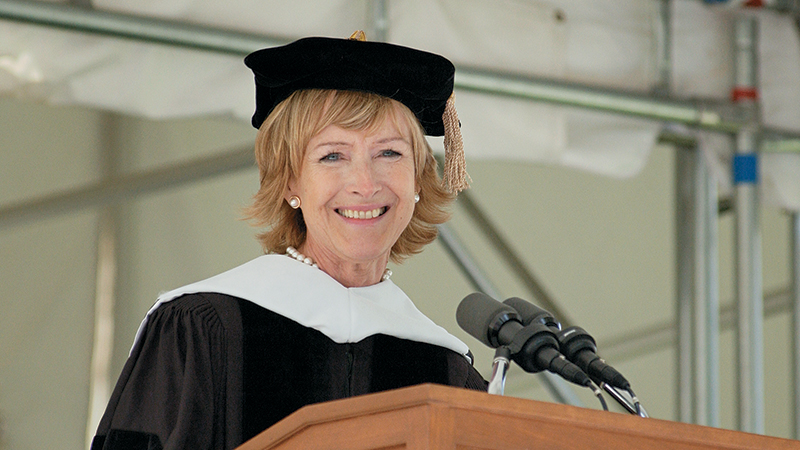 Judy Woodruff, CNN anchor and senior correspondent, was the speaker and an honorary degree recipient at Smith College's 126th commencement ceremony on Sunday, May 16.

President Christ, Provost Bourque, distinguished faculty, trustees, family and friends, and especially members of the Smith College Class of 2004: What a great honor to be here on this special occasion at this special institution.

It is remarkable to be in this collection of honorees today: Rita Colwell, Thelma Golden and Patricia Williams. My inclusion is testimony that affirmative action is alive and well in Northampton.

I am aware of the history of today, your earlier commencement speakers: John F. Kennedy, Alistair Cooke, Walter Lippman and Edward R. Murrow. It took Smith 40 years to have a woman commencement speaker, but you have more than made up for lost time with, among others, Maya Angelou, Marian Wright Edelman and last year, Madeleine Albright. What an honor to be on such a list.

And what an honor to speak at commencement as Smith graduates the United States’ first all-female class of engineers. Let’s give the 20 graduates of the Picker Engineering Program a special round of applause.

I will make one commitment: this will not be the longest commencement speech ever given. Research shows that that was a six-hour address given in the 19th century at Harvard — the first half was in Latin, the final three hours in Greek. Then the graduates were given a test.

I do feel an affinity for Smith. I have known so many of your distinguished alumnae over the years who have made such enormous contributions in politics and journalism.

I also have a very personal connection: Zhengli Zhu, a Smith graduate of the class of 1998. She came with me today, along with her mother, who is visiting from Shanghai.

At the risk of embarrassing her, I’m going to tell you a bit about Li-Li, whom we consider our Chinese daughter. She was an exchange student at the Sidwell Friends School in Washington more than ten years ago when she stayed with us for a semester. We had no idea she would become family: years later when she was married in the States my husband gave her away. But one of the enabling bonds on that journey was going through the college admissions process with this exceptionally bright young Chinese woman. That was when we first knew Smith was special.

She had a distinguished four years here. An economics major, she landed a great job with one of the prestigious Wall Street investment banking houses; she spent the next two years working 110 to 115 hours a week. A life of abundant riches was to follow after this two-year apprenticeship; pretty heady stuff for the middle-class daughter of a Shanghai accountant and schoolteacher.

I happened to know the CEO of that firm, and he reported that Li-Li was a treasure with an unlimited future. Then, at the end of those two years she did the unexpected: she tossed aside a lucrative job offer to follow in her mother’s footsteps and teach school.

So every school day for the past three years she has commuted from Jersey City to the Bronx — three hours daily. Like her peers, she is evaluated every year; she receives the highest grades for every category of teaching.

Why did she do this? Some of her former colleagues on Wall Street still ask her why. When I asked, she spoke of the nobility of teaching. But she also cited her Smith experience; the "intellectual inspiration and influence" of her professors: "I kept thinking of them as my role models."

This is not a recruiting speech for the National Education Association, although I hope some of you answer that noble calling. I also hope some of you go into investment banking; for those of you who do, on behalf of President Christ and the Smith trustees, always remember your alma mater!

But what Li-Li’s story suggests, I believe, is that your intellectual/moral compass has been finely honed during your four years here. Follow it.

In talking with several of you these past few weeks, this is strikingly evident: Meghan Taugher told me that Smith "has developed us as leaders.…We will do a lot of things." Nicole Berkes appreciates that she has "learned to think out of the box." Sienna Hunter-Cuyjet recalls the "homophobia and racial and anti-Arab sentiments after 9/11" that your class came together to deal with. In that vein, your sophomore year, as Liz Liedel says, was a time "bracketed by tragedy." She and others spoke of the leadership example set that difficult year by acting President John Connolly.

Because of all this, and more, you are young women ready to encounter choices and make decisions.

That does remind me of the sage counsel of another commencement speaker, Woody Allen. "More than any time in history mankind faces a crossroads," he told those graduates. "One path leads to despair and utter hopelessness, the other to total extinction. Let us pray that we have the wisdom to choose correctly."

The choices actually are much better, but let’s talk for a moment about some of the conundrums you will encounter.
The world you are about to traverse is much smaller than the one your parents entered. You are as likely to spend time in Frankfurt, Germany, as in Kentucky, or in Athens, Greece, rather than Georgia.

We are a far more globally interdependent economy and — with a few exceptions — this has been good. Smith has prepared you; more than half of you studied abroad and some 7 percent of you are from other countries.

Moreover, economically, politically, militarily and socially, America is the world’s leader, the trendsetter. American products and American culture are omnipresent.

Yet, at the same time, American policy, and even Americans, are increasingly reviled around the globe. America, not terrorism, too often is seen as the greatest threat to world peace.

In moderate Arab countries, supposedly our allies, Osama Bin Laden, a demonstrable murderer, is more popular than George W. Bush; a recent Pew study found the percentage of people in Muslim countries who feel that suicide bombings are justified, has soared.

American cannot lead — and you will have more difficulty in playing a prominent role in any international field you pursue — if this persists. A Field-of-Dreams international policy — do it and they will follow, irrespective of what the people believe — is a fantasy.

Allow me two asides. One, do not let my profession elude its responsibilities: the number of foreign correspondents on the three commercial networks has been cut in half over the past couple of decades and on September 11, 2001, there was not a single CBS, ABC or NBC correspondent in a predominately Muslim country; and then we wonder why we don’t understand one another.

Also, whatever your views on the Iraqi war, don’t make the mistakes that were made in Vietnam, where we condemned the warriors as well as the war. This way may prove to be a tragic mistake, as Vietnam did. But we should honor those brave young men and women — most from working-class families — who are serving their country in uniform.

Another crossroads of sorts revolves around the notion that you will have much to celebrate and worlds to conquer. Both true. There are more opportunities today than ever. Seize them. Have fun too.

When I was sitting in your shoes more than three decades ago about to leave Duke University, I never dreamed that I would interview presidents and prime ministers, travel the world covering major stories, report on every major presidential election for more than a generation, participate in national debates, and, in a tragic vein, be standing 15 feet away when the president of the United States was shot.

It has been heady stuff. I have been very fortunate.

But also know your heart will be broken. Mine has been in ways large and small. I have lost assignments, I have been beaten on stories, I have made mistakes — and that hurts, because in my business they are usually public. More important, I also have a severely disabled child.

What Smith has prepared you for — and what I believe Duke helped do for me — was to instill or sharpen the fiber, the resiliency, the courage to bounce back from those setbacks. But setbacks there will be.

For those of you so inclined, there’s the issue of combining career and family. Can you do it? Of course. Women have been doing it for centuries and, thanks to the feminist movement, there are more possibilities for you today. Over the past 40 years, women have gone from making 59 percent of what men make to 77 percent; although that’s welcome, it is also unacceptable.

Yet in the past few years, corporations and other institutions are making it more difficult, cutting back on flex-time and job-sharing and other arrangements that disproportionately help working mothers. The first child today lowers earnings for a mother by 7.5 percent; the second child by another 8 percent. That is unacceptable.

It also is unacceptable that our family and medical leave policies are so limited; this imposes a special burden on lower- and middle-income working-class families; over three-quarters of low-wage workers have no paid sick leave. These burdens fall heaviest on women.

Don’t accept these trends. Use your voice and the skills you acquired here to change them.

One other note to those who wish to combine career and family: I highly recommend it. I have been married to the man I love for almost a quarter century, and we are blessed with three marvelous children — well, a small caveat, two are teenagers. My family is the best thing that ever happened to me. But there is one constant: I am tired every day of my life. You will be too.

Finally, there is the matter of service to others; that has been a way of life at Smith. I am sure that each of you envisions continuing involvement with people and communities.

For most of you it will be tougher than you think today. There will be distractions, competing claims, job demands, family pursuits, the need to find some free personal time.

But find time. You know — much better than do the troglodytes of my generation — the value of technology to enrich our lives. But the information highway has never tutored an underprivileged young child, taken meals-on-wheels to an infirm senior citizen, transported people with disabilities, or played ball or watched a movie with an at-risk teenager. Those experiences enrich your lives too; they fashion your character, which forms your destiny.

You have enjoyed special privileges and opportunities. It was at another commencement almost 40 years ago when Robert F. Kennedy told Berkeley graduates: "You can use your privileges and opportunity to seek purely personal pleasure and gain. But history will judge you, and as the years pass you will judge yourself, by the extent to which you have used your gifts to lighten and to enrich the lives of your fellow beings."

You, more than most college graduates, should appreciate that. It was the dream of Sophia Smith that with this college and its alumnae "[women’s] wrongs will be redressed, their wages adjusted, their weight of influence in reforming the evils of society will be greatly increased…their power for good…incalculably enlarged."

I celebrate with you on this great achievement culminating in today. And I am a little envious of the grand challenges and choices ahead of you. Before you start, one final request: remember the words of Mark Twain, who said when he was 14, "my father was so ignorant that I could hardly stand to have [him] around. But when I got to be 21, I was astonished at how much the old man had learned...."

When this ceremony is over, go to your parents, who are so proud of you, even tell them how much they have learned as you thank them for their support and sacrifice. Then give them a big hug.