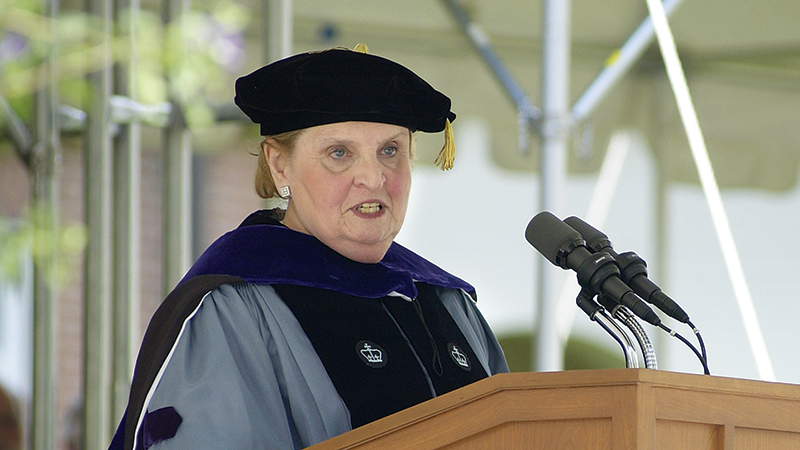 I want to begin by thanking you very much for the honorary degree. I know I speak for my fellow honorees in saying how grateful I am. I have seen the list of those who have received such degrees from Smith in the past and it is breathtaking. I can now say I have something in common not only with Eleanor Roosevelt and Toni Morrison, but also Garry Trudeau and President William McKinley.

To understate the case, this college has a storied history as a pioneer in women’s education, a defender of academic and intellectual freedom, and a leader in teaching the responsibilities of global citizenship. Looking now at the Class of 2003, it is obvious to us – not that we are biased — that those traditions continue to pay rich dividends.

To the parents, I can only say, as the mother of three college graduates, that I think I know how you feel this afternoon. The day has finally come. You cannot help marveling at how short the interval has been between diapers and diplomas. You are a little sad, a little relieved, a little astonished, and totally proud.

To the students, I say congratulations. Today is a time for celebration, for looking back and admitting that all the reading and studying, papers and presentations were worth it. In future years, you will recall this ceremony and realize that today, May 18, 2003, was the day you first began to forget everything you learned in college. But as the names of dead European kings and the various body parts of dissected frogs begin to fade, the true value of your days here at Smith will become more and more apparent. Because although you have learned a great deal about the world around you; chances are you have learned even more about yourself.

That is vital, because from this day forward, you will have to rely not on grades or guidance from professors to tell you how you are doing and where you stand. You will have to rely, instead, on an inner compass; and whether that compass is true will determine whether you become a drifter who is blown about by every breeze; or a doer, determined to chart your own course and unafraid, when necessary, to set sail against the strongest wind.

Today is a day of joy and for approaching the future with optimism, yet in our high spirits we cannot help but be conscious of shadows. These include the shock of terror. The sorrow of innocent lives lost whether to war, disease or some other plague. The insecurity and injustice caused by confusion resulting from the gap between rich and poor around the world. And the uncertainty caused by confusion about the direction of change in Iraq and the possibility of future conflicts.

There is a temptation to withdraw mentally from such perils, as if focusing our thoughts elsewhere might cause them to vanish. But avoidance is no way to live life.

One of the most moving stories to come out of September 11, 2001 involved a passenger on United Flight 93, which went down in Pennsylvania. The passenger, Tom Burnett, called his wife from the hijacked plane, realizing by then that two other planes had crashed into the World Trade Center.

Those words, it seems to me, convey the fundamental challenge put to us by life. We are all mortal. What divides us is the use we make of the time and opportunities we have.

Another way of thinking about the same question is to consider the recent discovery of similarities between the genetic code of a human being and that of a mouse. We are ninety-five percent the same. Perhaps each night, we should ask ourselves what we have done to prove there is a difference. After all, mice eat and drink, groom themselves, chase each other’s tails, and try to avoid danger. How does our idea of “have a nice day” depart from that?

It is possible, of course, that we are all so busy using time-saving devices we don’t have time to do anything meaningful.

Or we may have the right intentions, but instead of acting, we decide to wait – until we are out of school, until we can afford a downpayment on a home, until we can finance college for our own children, or until we can free up time in retirement. We keep waiting until we run out of “untils.” Then it is too late. Our plane has crashed and we haven’t done anything about it.

It’s not my intention this afternoon to deliver a lecture — or a sermon. But I will ask a question.

When you accept your diploma a few minutes from now, will you do so with complacency and self-satisfaction, or determined to strive for goals that matter? Will you go through life congratulating yourself for all that you have, or challenging yourself to find more and better ways to give? That is your choice. Fortunately, in making it, you will have no shortage of role models, for others have blazed a path in the right direction.

For example, Sophia Smith could have made her bequest to some frivolous cause — Amherst perhaps — but instead she placed her faith in educating women, creating a legacy that has opened doors for you and helped change the face of the world.

One hundred years ago, Jane Addams was a rare woman college graduate living in Chicago. She could have settled comfortably into a middle class life; instead she opened a settlement house that prodded our country to address the downsides of industrial development: such as child labor and dangerous working conditions, thereby earning an honorary degree from Smith College.

Fifty years ago, Smith granted another honorary degree, this time to a woman named Rachel Carson for her brilliant writing about the sea. Ms. Carson could have been content with that; instead she used her talent to expose the dangers posed by pesticides, sparking an environmental movement that has long since gone global.

Thirty-eight years ago, Rosa Parks could have done the expected thing and moved to the back of the bus in Montgomery, Alabama; instead she stood her ground, and helped create the higher ground of civil rights that has moved our nation closer to its founding promise.

As I speak, Aung San Suu Kyi could be living a life of ease and renown anywhere in the world except the one place in the world she truly belongs, fighting in Burma for the freedom of her people against a brutal police state.

There are many more models I could cite, from Susan B. Anthony and Sojourner Truth to the heroines of our own day in the arts and professions, business and public life. There are also countless women from cultures across the globe who have lived lives rich in love and accomplishment but whose names we do not know because they were or did not care to be famous. Their examples, too, I invite you to consider.

When we are very young, we do not acknowledge there are limits to what we may someday do. This is human nature, especially in America. When we get older, we realize that not every dream is possible. But we also learn that the investment of energy, the gaining of experience, and the application of knowledge is empowering.

Among those receiving degrees today, I sense a bountiful mixture of energy, intelligence and courage. So I am optimistic that individually and collectively you will become a mighty and positive force. Perhaps one of you will compose a poem that inspires the mind; another a song that engenders love; a third a novel casting light upon the mysteries of life; while the fourth writes a play so sophisticated it can only be understood by someone who is a genius or French.

Perhaps one of you will develop a new foreign policy doctrine that spells out America’s appropriate global role — somewhere between an isolationism shunning the problems of the world, and a neo-imperialism scaring the dickens out of friends and foes alike. Perhaps one of you will make history by serving as President of the United States or by doing what is so obviously beyond the power of any male, and managing the Boston Red Sox to their first world championship since 1918.

I have tried today to speak with a light touch, but I do not mean to understate or in any way make light of the seriousness of the work that is crying out to be done on this planet.

I am incredibly proud of America. I believe in the goodness of our power, and in the uplifting power of our ideals. No nation has done more to aid others around the globe. But I also believe we could do better.

Decade by decade, we have shared less and less of our wealth. Today, among industrialized countries, our government ranks dead last in the percentage of our giving.

Nothing bothered me more when I was Secretary of State than the lack of resources we were prepared to invest in human development. I was supposed to be the world’s most powerful woman, and yet when I saw girls and boys in refugee camps who had survived exploitation and war I was all too often unable to promise them hope. When I saw courageous women coming together across cultural lines to prevent renewed genocide in Africa, I was unable to guarantee help. When I saw mothers dying of AIDS, I was unable to assure care for the infants they were leaving behind. When I saw children who had lost an arm or a leg to a land mine, I was unable to say with certainty that the same thing would not happen to their sisters and brothers.

Let us never forget as we enjoy the privileges of living in this country that no human being is dispensable. That is true of the young and old, regardless of race, nationality or gender. It is true of civilians and soldiers, apple-pickers and CEOs. A human being is not some thing to be used and thrown away once he or she has contributed on the front lines or to the bottom line; no person is a means; every person is an end, and the health and well-being of each and every one of us should matter to each and every one of us. That’s true in America at its best, and we should do all we can to make it true around the world.

To those who graduate today, let me say that I do not intend this afternoon to put the weight of the world upon your shoulders, for that will always be your parents’ job. But I do hope that each of you will use the knowledge gained here at this magnificent college to be more than a consumer of liberty, but also a defender and an enricher of it, employing your talents to heal, help and teach. I hope you will be doers not drifters, and that you will choose to live life boldly, with largeness of spirit and generosity of heart — and that you will encourage our leaders to do the same.

It is said that all work that is worth doing is done in faith. This afternoon, at this ceremony of celebration and anticipation, I hope you will each embrace the faith that every challenge surmounted by your energy; every problem solved by your wisdom; every soul awakened by your passion; and every barrier to justice brought down by your determination will ennoble your own lives, inspire others, and explode outward the boundaries of what is achievable on this earth.

To the Class of 2003, I say again, “congratulations.” And thank you once again for allowing me to share with you this wonderful day.