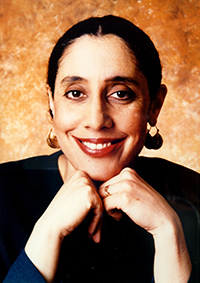 At commencement ceremonies on Sunday, May 19, 2002, pioneering law professor and civil rights champion Lani Guinier told Smith College students that the most important thing a liberal arts education could impart "is a chance to learn from your failures not just your successes."

Guinier is the author of a number of books, including Lift Every Voice, an analysis of the civil rights movement through the lens of her 1993 nomination by President Clinton, later withdrawn, to be the first black woman to serve as assistant attorney general for civil rights. She drew on her personal experiences to illustrate the importance of "the nerve of failure."

"When I was dis-appointed in 1993, I learned who I was, I learned what I stood for, I learned what was most meaningful to me, and I learned that however much I was suffering from the public humiliation I experienced, there were many more people in this country who suffered much more every day."

Acknowledging that it might "seem peculiar to be talking to a group of graduates about failure on a triumphant day in which you have a lot to celebrate," Guinier noted that the credentials of accomplishment, such as a college diploma, confer the responsibility "to be a lifelong learner, not just a lifelong earner." She predicted that those "who are willing to learn from their peers who are different than they are those who experience the strongest intellectual outcomes as well as the most important democratic outcomes."

Elaborating on a theme of her latest book, The Miner's Canary: Enlisting Race, Resisting Power, Transforming Democracy, Guinier told the graduates that, like canaries used to test for poisonous gases in mines, the experiences of underrepresented, "alienated or marginalized" groups, such as women, people of color, gays and lesbians and the disabled, are often early warnings for toxic developments in our society as a whole.

Sharing the stage with Guinier were six distinguished women who received honorary degrees. They were Anita F. Hill, professor of social policy, law and women's studies at Heller Graduate School, Brandeis University; Anne Martindell, Ada Comstock Scholar, member of the Smith Class of 2002 and former United States Ambassador to New Zealand and Western Samoa; Cynthia Moss, director of the Amboseli Elephant Research Project in Kenya, Africa, and a member of the Smith Class of 1962; Katha Pollitt, columnist and commentator on popular culture and politics; Sima Wali, a native of Afghanistan, champion of inclusion of women in the country's current cabinet and president and CEO of Refugee Women in Development, Inc.; and Shirley Ann Jackson, president of Rensselaer Polytechnic Institute.

Guinier received an honorary degree from Smith in 1999.