If you are interested in learning to ring the bells at the Mendenhall Bell Tower, please contact Hannah Durrant to arrange a visit. Visitors from other towers are welcome. Please contact us in advance to ensure that practices are being held.

Due to COVID-19 all practices are suspended until further notice

All practices are open to new ringers and visitors. Come for an hour, or for the whole practices. Enter Mendenhall Performing Arts Center at the Berenson Studio across from Sage Hall. Accessing the ringing chamber requires climbing a short ladder.

When you hear the bells ring on campus, that means that people are inside the Mendenhall Bell Tower, where eight bells hang, with a rope attached to each. The bell ringers are assigned to one bell at a time and, starting in sequence from highest to lowest, they ring them in various permutations.

Ringers use a four-part stroke in order to move the bell back and forth through a whole pull. Subtle adjustments in the timing and strength of each of the pulls and checks allow the ringer to alter the interval between sequential soundings of his bell, thus effectively moving its position in the row.

The process is challenging due to the bells' mechanics, but at the same time is a rewarding activity that anyone can participate in at almost any age. 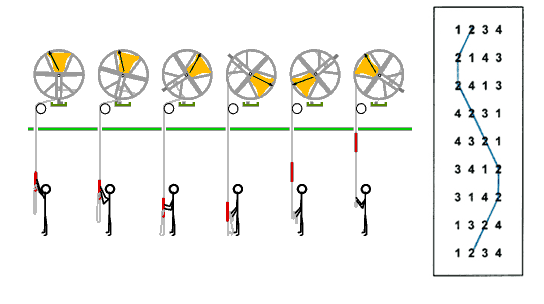 For all the bells to be sounded exactly where and when they should be requires very close teamwork among all the ringers in the band. Since a bell sounds about three quarters of a second after the ringer has initiated the pull, achieving correct striking requires the development of reliable internal rhythm, fine attunement to the actual sound of the bells, and the ability to interpret the visible movement of all the ropes in the circle.

The changes in the order of the bells' sounding constitute a method that is governed by four rules and one ideal. The rules are that: (a) each bell sounds once in each row; (b) no bell may move more than one position at each change/row; (c) no row is repeated; and (d) the ringing begins and ends in Rounds.

The diagram shows the simplest of the methods, Plain Hunt, on four bells with a line drawn through the path–that is, the sequence of moves forward and backward in the order–that is followed by Bell #2. So, in the first row the bells ring in order 1234, then in the next row adjacent pairs of bells all switch positions and the order becomes 2143. In the next row, the bells in the first and last positions remain in place and all the others switch producing the new order: 2413. Such switching continues until the bells come back into Rounds.

Parts of a Bell

(Courtesy of the National American Guild of Change Ringers)

Learn more about the

dynamics of a ringing church bell.

We owe our gratitude to Alice Dickinson, Mathematics Professor Emerita for her efforts in bringing the bells to Smith and her work in building the changeringing exercise in North America. This tribute was published by the North American Guild of Change Ringers (NAGCR) in their quarterly newsletter: Clapper Vol. 15 No. 4 Autumn 1988: