Theater of War: Antigone in Ferguson

Theater of War Productions works with leading film, theater and television actors to present dramatic readings of seminal plays—from classical Greek tragedies to modern and contemporary works—followed by town hall-style discussions designed to confront social issues by drawing out raw and personal reactions to themes highlighted in the plays. Smith joins other institutions of higher education—Harvard, Scripps, Emory, Georgetown, Duke, Pomona, Claremont McKenna—along with the Brooklyn Public Library, the Laboratory for Global Performance and Politics, and the Stavros Nirachos Foundation in bringing this live, virtual theatre event to the public free of charge.

Antigone in Ferguson is a groundbreaking project that fuses dramatic readings by acclaimed actors of Sophocles’ Antigone with live choral music performed by a diverse choir, from St. Louis, Missouri and New York City culminating in powerful, healing discussions about racialized violence, police brutality, systemic oppression, gender-based violence, health inequality, and social justice. The project was conceived in the wake of Michael Brown’s death in 2014, through a collaboration between Theatre of War Productions and community members from Ferguson, Missouri, and premiered at Normandy High School, Michael Brown’s alma mater, in September of 2016, and has since toured the country and the world.

In light of the uprising and protests catalyzed by the killings of Ahmaud Arbery, Breonna Taylor, George Floyd, Tony McDade, Dion Johnson, and many others; and the disproportionate impact of the COVID-19 pandemic on black and brown communities, Antigone in Ferguson aims to generate dialogue, consciousness, compassion, outrage, understanding, and positive action at this critical moment. This special presentation of Antigone in Ferguson on Zoom will foreground the perspectives of people in Baltimore whose lives have been impacted by police brutality, community violence and the COVID-19 pandemic.

All of Theater of War Productions events follow the same format:

To experience this event: Please download Zoom to your laptop or mobile device. The event Zoom link will be distributed and available to registered attendees starting two days prior to the event. 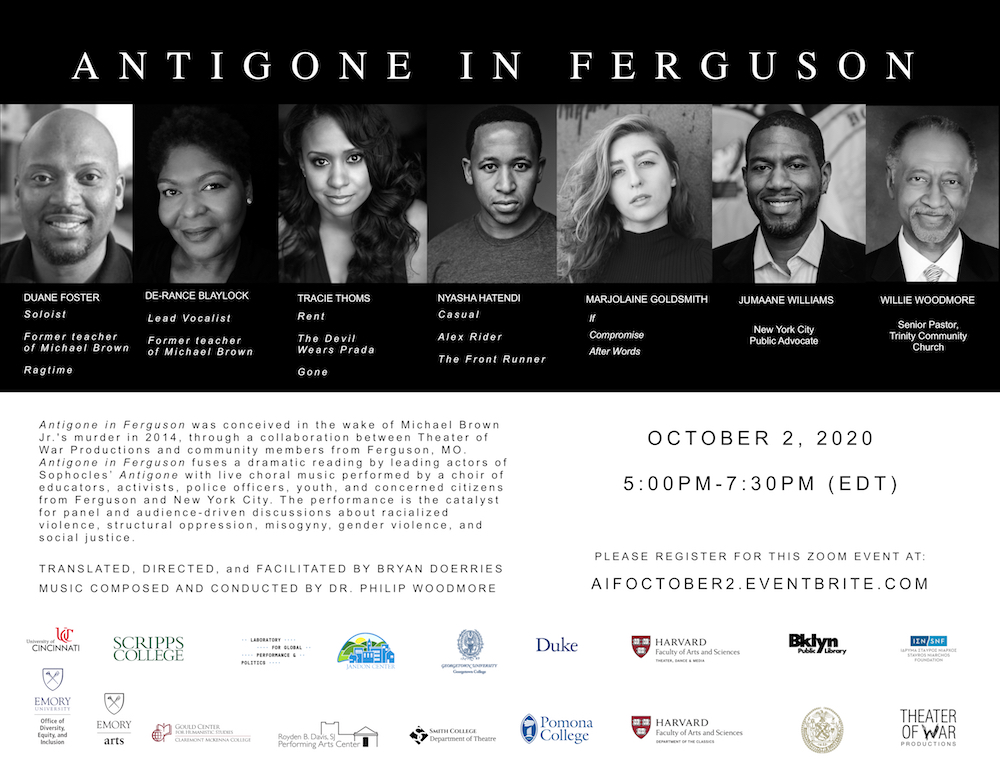