Anyone passing by Lilly Hall in recent weeks might well have heard the sounds of drums, singing and dancing coming from the classrooms inside.

Those were audio clues to an innovative training program led by Smith College School for Social Work Professor Joshua Miller.

An expert on helping people recover from natural disasters and war, Miller created an exchange program that brought nine community leaders from Rwanda and Uganda to Smith this spring for a six-week training in conflict resolution. The fellows—teachers, organizers, health-care workers and clergy—are all engaged in helping their communities heal from decades of genocide and war.

Miller created the exchange in partnership with the Amherst-based Institute for Training and Development. The program, funded by the U.S. Department of State’s Bureau for Educational and Cultural Affairs, provided the African fellows with skills training at Smith and internships with area community groups that offer peace-building services. 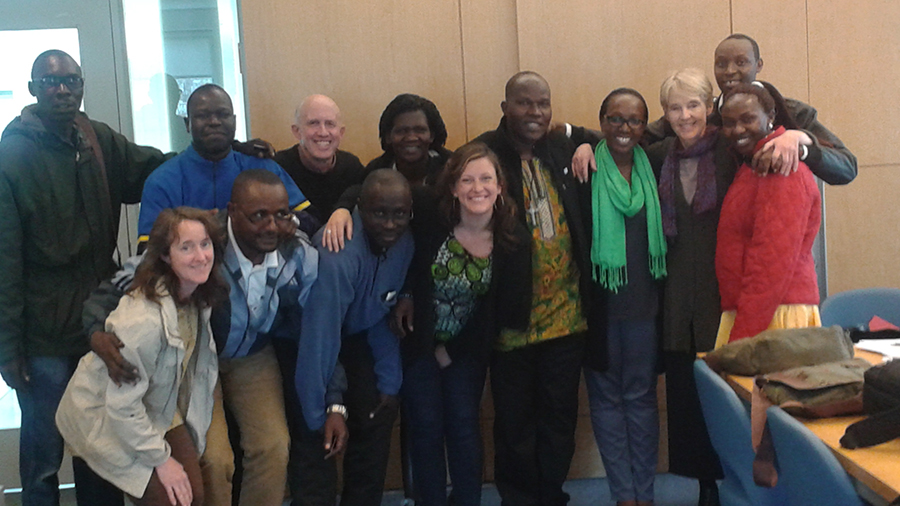 Smith School for Social Work Professor Josh Miller (3rd from left, back row) poses with community leaders from Africa and program administrators during a training on campus.

And what of the drums, singing and dancing?

“We did a lot of that in the trainings,” said Miller, with a smile. “When you are talking about ways to heal from trauma and war, culture is very important. Talk therapy might be further down the list. Higher up is singing and dancing.”

Helping people develop healing tools from within their culture—an approach known as psychosocial capacity building—is something Miller has been studying for more than a decade. His 2012 book, Psychosocial Capacity Building in Response to Disasters, describes how the approach differs from what typically happens after a collective trauma, when clinicians “swoop” into a community, offer individual counseling—and then leave.

“The idea is that we are all teaching one another,” he added. “It’s not a top-down training but more of a genuine exchange.”

Miller first encountered psychosocial capacity building in 2006 in Uganda through fellow School for Social Work Professor Joanne Corbin. At the time, Corbin was researching Ugandan communities that were recovering from kidnappings and killings perpetrated by followers of anti-government warlord Joseph Kony.

Through Corbin, Miller met Father Remigio Obol, a Catholic priest whose church was located in a district where Kony’s Lord Resistance Army was active. Obol asked Miller to use capacity building to help improve medical care in northern Uganda. The result was a group called STEP-UP Uganda (Sustain, Train, Educate, Promote)—an organization that Miller still works with and which helped recruit fellows for the new exchange program.

What I’ve liked is that people are concerned about things, and they can talk and express themselves. If we speak up, something good can happen.

A Rwandan organization called Memos: Learning From History is another partner in the exchange, helping recruit Rwandans for the U.S.-based program and hosting programs in Africa that U.S. participants will attend in August.

During the training session at Smith that wrapped up May 29, participants explored ways to help survivors with the after-effects of trauma, such as depression, domestic violence and the breakdown of social trust.

Miller said he was inspired by the creative healing solutions that many fellows are already using in their communities.

He noted that participants from Rwanda have spent two decades rebuilding their society after government-backed militias sparked mass killings of Tutsis and moderate Hutus in 1994.

“They’ve learned some ways of healing that they can share,” Miller said. “And they’re really interested in reforming their society. For example, it’s now required that 50 percent of political leaders in Rwanda must be women.”

In addition to skills training sessions on campus, participants in the exchange program took part in cultural activities and field trips, including a visit to Unitas Therapeutic Community, a treatment and prevention program for youth in the South Bronx.

Patrick Onguti Okello, who works with farmers’ cooperatives in northern Uganda, said interning with the Pioneer Valley Project coalition reminded him that not all Americans are well off.

“I realized that there are a lot of problems here,” Okello said. “What I’ve liked is that people are concerned about things, and they can talk and express themselves. If we speak up, something good can happen.”

Agnes Umutesi, a violence prevention trainer with the Rwanda Men’s Resource Center in Kigali, was impressed by the spirit of optimism and voluntarism she witnessed during her time in the Pioneer Valley.

Evelyn Akidi, who teaches high school in Gulu, Uganda, said the training at Smith and her visits to the Paulo Freire Social Justice Charter School in Holyoke inspired her anew about her own work with students.

“I’ll be able to take something back home with me,” Akidi said.

Julie Hooks, co-executive director of the Institute for Training and Development, echoed that sentiment on the final day of the training by encouraging participants to view each other as a resource for the future.

“That’s something tangible you can bring home—your relationships with each other,” she said.

The exchange program continues this fall when another group of community leaders from Rwanda and Uganda will arrive at Smith for training. In January 2016, representatives of community groups the fellows interned with in Massachusetts will travel to Africa to complete the circle.

Miller said launching the exchange program has taught him “a ton” about how to train people for effective conflict-resolution work.

“What I really like about this approach is that it’s reconnecting with social work’s roots in programs like the settlement houses” of the 19th century, he said.

Miller said he also values the relationships he’s built with community leaders in Rwanda and Uganda through the exchange.

“These are some of the most exciting people I’ve ever worked with,” Miller said. “They are young, dynamic and committed professionals. This is the work I want to be doing for the next several years.”