Sydney Abraham ’21 and Melissa Dollison ’18 are authors of “Climate Change, Agriculture and Adaptions: Policy Recommendations for Conservation Agriculture,” published in the inaugural journal of Climate and Society. Abraham is majoring in environmental science and policy, and Dollison graduated last year with a degree in government from Smith. 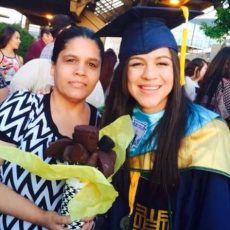 Daisy Astorga Gonzalez ’19 has created a “laptop scholarship” program for fellow first-generation Latinx high school and college students in Albuquerque, N.M., where she grew up.  The Se Vale Soñar Scholarship will support the purchase of laptops for high school students who are applying to college and internships, as well as college students who need laptops for homework and other essential educational activities. A sociology major, Astorga Gonzalez says the example set by her immigrant mother—who worked hard to buy a laptop for Astorga Gonzalez when she was applying to Smith—was the inspiration behind the scholarship program.

Olivia Cooper ’20 received an honorable mention in the American Astronomical Society’s Chambliss Astronomy Achievement Student Awards poster competition. Cooper was among 360 undergraduate and graduate students presenting research before a panel of judges at the January competition in Seattle, Wash.

Ada Comstock Scholar Angela Gregory has been elected to a two-year term on the board of the Friends of Northampton Trails and Greenways. Gregory, who is majoring in fine art and landscape studies at Smith, worked on Grow Food Northampton’s successful drive to purchase 121 acres of farmland for an organic community farm and gardens.

Carrie Baker, professor of the study of women and gender, was the lead organizer for a Ms.Magazine event, “Writing for the Popular Press: A Workshop for Feminist Scholars,” held in January at Smith. The workshop drew participants from the Five Colleges to hear from Ms. editors and writers. Smith participants were Nancy Whittier, Sophia Smith Professor and Professor of Sociology; Suzanne Gottschang, associate professor of anthropology and of East Asian studies; Virginia Hayssen, professor of biological sciences; Marissa Hoechstetter, director of donor relations and communications; and Marcela Rodrigues Guimaraes ’20J.

Justin Cammy, associate professor of Jewish studies and comparative literature, is the author of the introduction to The Full Pomegranate, a new collection of Yiddish poetry by Avrom Sutzkever.

Professors of Chemistry Elizabeth Jamieson and Cristina Suarez have been awarded a $406,477 grant from the National Institutes of Health for “Effect of the Spiroiminodihydantoin Lesion on DNA Base Pair Opening Dynamics, Nucleosome Assembly and Base Excision Repair.”

Laura Katz, Elsie Damon Simonds Professor of Biological Sciences, has been awarded a $69,953 grant from the National Science Foundation for “Transcriptomes of Antarctic Foraminifera,” a research project about a bottom-dwelling oceanic species.

Patricia Woods ’00, assistant director for career development, is the recipient of a 2018 professional development award from the National Board for Certified Counselors Foundation. Woods, who majored in psychology at Smith, earned a master’s degree in education from Columbia University Teachers College.

Kaari Pitkin ’94 is the recipient of an Alfred I. duPont Award from the Columbia University Graduate School of Journalism for Caught, a nine-part podcast for WNYC Radio about the juvenile justice system. Pitkin, who majored in sociology at Smith, is a longtime news and documentary producer for WNYC.

Hilary S. Franz ’92 is the new Commissioner of Public Lands for Washington state. Franz, who majored in English language and literature and government at Smith, earned a law degree from Northeastern University. She is a former director of Futurewise, a sustainable land use organization, and has served on the Bainbridge Island City Council and numerous state and regional boards and commissions.

Smith Trustee Camille O’Bryant ’83, S.M. ’86, associate dean of California Polytechnic State University College of Science and Mathematics, was the inaugural recipient of the Martin Luther King Jr. Legacy Award from the college’s Cross Cultural Center. O’Bryant, who earned a bachelor’s degree in French and a master’s degree in exercise and sport studies at Smith, chairs Cal Poly’s inclusion and equity committee. She has a doctoral degree in leisure and recreational activities from Ohio State University. 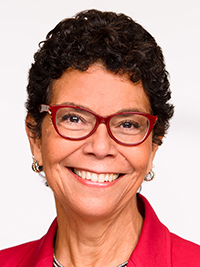 Smith College Medalist Phoebe Haddon ’72 is the recipient of a 2019 Ruth Bader Ginsburg Lifetime Achievement Award from the Association of American Law Schools Section on Women in Legal Education. Haddon, who is chancellor of Rutgers University-Camden, is a member of the American Bar Association’s Commission on the Future of Legal Services and is deputy board chair of the Federal Reserve Bank of Philadelphia’s board of directors.

Pamela Stobierski ’83 has been named chair of the board of directors of Greenfield Savings Bank.  Stobierski, who majored in education and child study at Smith, has been a trustee of the bank since 2008 and has also served as a member of the Franklin County Bar Association.