Every summer for the past several years, Smith students interning with the Botanic Garden have spent countless hours pulling invasive plants from the banks of the mile-long stretch of the Mill River that meanders through campus.

Their efforts are part of the college’s long-term commitment to help keep the river free of invasive plant species.

The guide—which can be downloaded for free on the Mill River Greenway Initiative’s website—offers easy-to-follow instructions for how to identify and combat each problem plant species, as well as suggestions for replacement plantings of species native to the area.

“It’s a pocket guide for people who want to know what bittersweet looks like, or how you go about combating Japanese Knotweed,” said Gaby Immerman, who teaches horticulture at Smith and is co-founder of the Mill River Greenway Initiative.

The citizen organization has been supporting the college’s efforts to eliminate invasive plants from the river’s banks near Paradise Pond, Immerman said. It’s a “Sisyphean effort,” though, if invasive plants are removed from only one portion of the waterway instead of throughout the watershed, she noted.

The new guide is a way to spread plant conservation know-how along the length of the Mill River. “We thought if everyone had the same information, we could extend river stewardship well beyond the mile of river that’s on the Smith campus,” Immerman said. “Our individual efforts will be more successful if we all start rowing together.”

While invasive plant species make up only about 10 percent of the state’s flora, they can cause significant harm to water quality, biodiversity and the amount of tree cover in affected natural areas, said Amanda Weise, ecological programs manager for the New England Wild Flower Society—whose organization wrote the new pocket guide.

“Invasives know no boundaries,” Weise said. “Our hope is that this guide will be a tool to help expand invasive plant removal to other watersheds.” 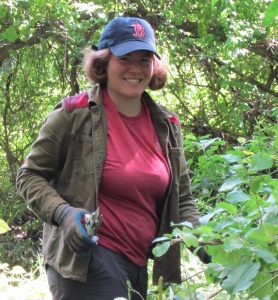 Jessie Blum ’15 spent countless hours during her time at Smith pulling invasive plants from the banks of the Mill River.

Jessie Blum ’15 is one of numerous Smithies who have gained experience mapping and removing invasive plants along the Mill River. Blum—who is now a gardener at Tower Hill Botanic Garden in Boylston, Mass.—said partnering with the Mill River Greenway Initiative and the New England Wild Flower Society was a way to amplify past strategies used to control invasive plants along Smith’s riverbank.

“We knew this was a problem that had to be tackled by something larger than the college,” she added.

Julia Portocarrero ’18, who interned with the Botanic Garden last summer, hopes the new guide will reach a broad audience.

“The guidebook is a great resource to help restore natural areas and promote more native plant growth,” she said.

What did Maria Bermudez '21 learn during the pandemic? "How to spend time with myself and figuring out how to feel comfortable being alone which is very hard," she tells the @DailyHampGaz https://t.co/KFYZK46NP1 https://t.co/mg2QSnOudJ