Letters to a ‘Second Mother’: New Items in Smith Collection Show Another Side of Sylvia Plath ’55

Karen Kukil, associate curator for special collections at Smith, surveys 12 letters from Sylvia Plath ’55 that were recently donated to the college. Photo by Isabella Casini ’17.

In it, the young woman shares the news that she has won a $100 prize for a writing contest that her “aunt” encouraged her to enter.

“Thank you again for your part in this piece of good fortune,” she writes, “Much love, Sivvy.”

The letter is among 12 pieces of correspondence from poet and novelist Sylvia Plath ’55 to Marion Freeman—the mother of a childhood friend of Plath’s from Winthrop, Mass. Plath’s friend, Ruth Geissler, donated the letters to Smith’s Sylvia Plath collection in December 2015.

Karen Kukil, associate curator for special collections at Smith, says the letters reveal a seldom-seen side of The Bell Jar author Plath, who committed suicide at age 30.

“The letters show the relationship Plath had with someone she considered her second mother—a relationship that was very close and nurturing,” says Kukil, who is currently co-editing The Letters of Sylvia Plath with Plath biographer Peter K. Steinberg. (The book is due to be published by Faber and Faber in 2017.)

Kukil is also co-curating with Dorothy Moss ’95 an exhibit on Plath that will open in 2017 at the Smithsonian’s National Portrait Gallery in Washington, D.C.

Kukil notes that many of the other 150 letters in Smith’s Sylvia Plath collection are ones that Plath wrote to her classmates. “These letters to Marion Freeman are special in that they show Plath’s connections to people she grew up with,” Kukil says. “It is a very generous gift.” 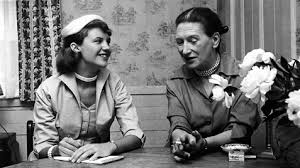 When Freeman died in 1998, Geissler discovered the letters from Plath in an envelope among her mother’s things. She knew that she eventually wanted to donate them to Smith.

“That’s where the letters belong,” says Geissler, whose daughter, the Rev. Susan Geissler-O’Neil, is a member of the Smith class of 1978.

Geissler hopes the letters will help reveal Plath as “someone who evolved as a person and a writer.”

Geissler’s perspective on Plath grows out of her family’s history with the writer. Plath’s mother, Aurelia, became friends with Geissler’s mother in Winthrop when their children were young—and their daughters soon followed suit.

“Our families shared so much,” Geissler says. “We spent every day at the beach together, and we were constantly at each other’s houses. For my 14th birthday, Sylvia took me to see the movie ‘The Red Shoes,’ which was my favorite movie for years.”

Freeman was a mother figure to Plath, Geissler says.

“When Sylvia’s father died when she was 8 and kids teased her about the possibility of having a stepfather, she came by our house and my mother consoled her,” Geissler recalls. “That relationship continued throughout Sylvia’s life.”

The dozen letters that are now part of Smith’s collection reveal the deep affection Plath felt for Freeman—and for Geissler, whose wedding Plath participated in as a maid of honor.

“You will always be like a second mother to me, you know,” Plath wrote to Freeman in November 1946.

“Ruthie was a peach,” she added, alongside a small drawing of the fruit.

Kukil says Plath’s bond with Freeman and Geissler was a source of support as Plath struggled with bouts of depression—including one during her Smith senior year, when she was admitted to McLean psychiatric hospital in Belmont, Mass.

In a letter to Freeman dated Jan. 16, 1954, Plath writes that she is excited to be returning to Smith after her stay in the hospital. She signs it “Yours, Sivie”—a misspelling that hints at a still fragile state of mind.

In later years, as Plath became a famous writer and a mother, Freeman remained a trusted confidante and a source of continuity, Kukil says.

In a letter dated Jan. 31, 1962—written when Plath was living in England with her husband and fellow poet, Ted Hughes—Plath thanks Freeman for sending her copies of Woman’s Day magazine, which contained plans she used to make a cradle for her daughter’s dolls.

“You have no idea what a hit the Woman’s Days made here!” Plath writes.

Plath biographer Steinberg says the 12 letters now housed at Smith paint a more complete picture of the poet, who is often portrayed as sad and harsh.

“They show Plath being gracious and affectionate—qualities not often associated with her,” Steinberg says. “With Plath if there was another female involved, there was usually a sense of rivalry. That didn’t exist with Ruth Geissler or Marion Freeman.”

Geissler, who attended the University of Massachusetts Amherst and now lives near Saratoga Springs, N.Y., believes that Plath’s 1963 death is also misunderstood.

“I am of the mind that she did expect to be rescued,” Geissler says.

Geissler’s daughter, the Rev. Susan Geissler-O’Neil of California, says she is “delighted” that letters that have been part of her family’s history are now available to students and scholars using Smith’s special collections.

“The Sylvia most people hear about is not the Sylvia that we knew,” Geissler-O’Neil says. “I’m glad people will see another side of her.”

Why aren’t sports bras considered necessary sports equipment? The Sports Bra Project, founded by soccer coach Sarah Dwyer-Shick ’96, seeks to change that, as well ensure all sports are accessible to girls and women by overseeing donations of new sports bras distributed to organizations around the world. But the story doesn't end there.

Getting to the Heart of COVID-19

Virologist Angela Rasmussen ’00 has a knack for making complex scientific information accessible. It is a skill that has made her one of the go-to scientists members of the media turn to help make sense of SARS-CoV-2, the name of the virus that causes the disease COVID-19.

In the midst of a health crisis, President Trump announced a withdrawal of the U.S. from the World Health Organization. Violet Rawlings '22 writes in @MsMagazine about why that's a bad idea. https://t.co/EyxT9WGWuZ https://t.co/dmEFgagLrE

The ability to create art isn't tied to being able-bodied, says artist Erika York '12, whose macular degeneration has helped shape her bold canvases and faceless figures. Art is for anyone with a unique perspective. https://t.co/I2uJRHXNiv https://t.co/VPAOYrSA4o