Neuroimmunologist Jean Merrill ’69 and her husband, Douglas Munch, brought their decades of experience in drug development to Smith during Interterm.

Merrill Hesch can pinpoint the exact day and time when, after years of mysterious pain and mobility problems, she was finally diagnosed with multiple sclerosis.

It was March 17, 2011. “Everyone who is diagnosed with MS knows their anniversary,” Hesch told a classroom full of Smith students enrolled in a Drug Discovery (Biomedical Innovation) class during this year’s Interterm. “I spent that weekend sobbing in bed.”

The classroom in the basement of Ford Hall was pin-drop quiet, as Hesch—who is the mother of Sarah Pieper ’18—described her troubling symptoms, her initial despair over her diagnosis, and the combination of drugs and physical therapy that eventually enabled her to take up biking and swimming.

Students said hearing Hesch’s story was one of the highlights of the Interterm class, taught by alumna Jean Merrill ’69—a neuroimmunologist who has studied MS for 35 years and who holds four patents for work on MS drugs—and her husband, Douglas Munch, a medical scientist, senior corporate executive and consultant. 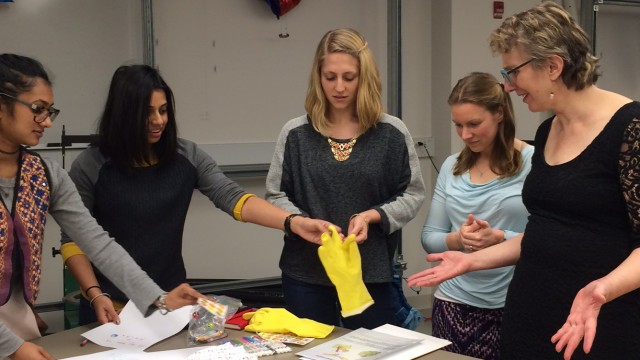 Smith parent Merrill Hesch (far right) who has been diagnosed with multiple sclerosis, takes part in an exercise mimicking symptoms of the disease in an Interterm class on MS drug discovery. Assistant professor Sarah Moore (second from right) was one of three class instructors.

The Interterm course was an interdisciplinary experiment that introduced Smith students to the process of pharmaceutical drug development and challenged them to develop proposals for new MS drug therapies.

Students said Hesch’s talk helped demonstrate one of the main lessons of the Drug Discovery course: That empathy is key to successful scientific study and entrepreneurship.

“It’s important to know why you are doing what you are doing in the lab,” said Allison Sirois, a graduate engineering student who served as teaching assistant for the course. “Hearing from a person with MS provided us with that.”

Daniela Deny ’18 said she benefited from the “interdisciplinary approach to understanding the unmet needs of MS patients.”

“This course managed to combine medicine, ethics, business and pharmacology. I learned so much about myself as a scholar,” Deny added.

Assistant professor of engineering Sarah Moore partnered with Merrill and Munch in teaching the two-credit Interterm class, which focused on the science of MS—a still mysterious autoimmune disease of the brain and spinal cord that can cause a wide range of visual, motor and sensory problems.

Working in teams, students were asked to complete two major projects: A review of the status of existing drug treatments for MS and a proposal for new target compounds for drug development, along with a research and business plan aimed at bringing that new drug to clinical trials.

Merrill said that by the start of the second week, none of the teams had yet settled on an idea for a new drug therapy. Concerned that students might be feeling overwhelmed by the task, she offered to share a list of potential targets to help them move forward.

“Nobody asked for the list,” Merrill said. “When students gave their final presentations, I was very impressed with what they came up with. They identified legitimate targets that are currently being investigated by pharmaceutical companies. Their commitment to learning exceeded my expectations.”

“We also talked about business, ethics and marketing of pharmaceuticals,” he said. “By the end of the course, the students were putting all of those building blocks together.”

Smith’s Center for Women and Financial Independence provided support for the course and helped organize an alumnae career panel for students.

“I was very impressed with the student presentations of different cases related to real ethical issues facing the pharmaceutical industry,” said Mahnaz Mahdavi, the center’s faculty director. “They had done their research!”

Moore, the assistant engineering professor, said she was struck by the way the Interterm course drew students from different academic disciplines—including biology, chemistry and economics—to work in project teams.

“The course’s co-teaching model also brought together instructors with different and complementary backgrounds,” Moore said. “Every person involved in the course was constantly engaging with a new perspective on the overall question of developing a new therapeutic strategy.”

For Meghna Purkayastha ’16, the focus on “real-world learning” was what made the Drug Discovery course so powerful.

“It tested our abilities as a group to comprehend material that didn’t necessarily come easily, said Purkayastha.

Kristine Chin ’17 said the class gave her new confidence, adding,“I wish it was a semester-long course.”

What did Maria Bermudez '21 learn during the pandemic? "How to spend time with myself and figuring out how to feel comfortable being alone which is very hard," she tells the @DailyHampGaz https://t.co/KFYZK46NP1 https://t.co/mg2QSnOudJ