While most college students have fond memories of playing with Legos as kids, it’s rare that they have a chance to play with the brightly colored building blocks as adults.

On a recent afternoon in the Kahn Liberal Arts Institute’s Colloquium Room in Neilson Library, about two dozen Smith engineering students set to work crafting a range of structures from a small pile of Legos—not unlike children stacking the mini-bricks into imaginative creations.

Their playful activity had a larger aim. It took place during a “Lego Serious Play” workshop hosted by facilitators from corporate communications firm Team Dynamics Boston.

The activity—designed to promote effective collaboration and teamwork—was part of Smith’s Design Clinic, a two-semester capstone course for senior engineering majors, in which students collaborate in teams on real-world projects. Medtronic, Stantec and Under Armour are among the industry sponsors of this year’s clinic. 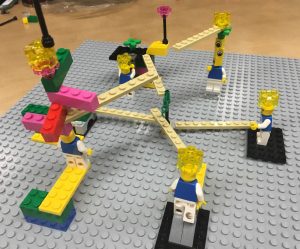 The annual Design Celebration showcase of projects from this year’s Engineering Design Clinic will be held Friday, April 29, from 1:10 to 4 p.m. in the Campus Center Carroll Room, followed by a reception.

“The Design Clinic course helps prepare students for careers as engineers,” said Susannah Howe, director of the clinic and a senior lecturer in engineering at Smith. “Since most engineering work involves multiple people, it’s important for students to learn how to work effectively on a team.”

“By utilizing visual, auditory and kinesthetic skills, the Method requires participants to learn and listen, and it provides all participants with a voice, regardless of culture or position,” the description says.

What did the Method look like in real time?

The Smith students—responding to prompts from facilitators, such as “what does ‘not knowing’ mean to you?” and “build a barrier to teamwork”—went to work conceptualizing and building their Lego structures, then discussing their creations with their teammates. Each prompted activity sought to lead students further into an analysis of the subject, while encouraging group discussion and a collective hands-on experience.

For the final workshop project, students worked in teams to combine their respective individual structures into a single landscape reflecting their group’s dynamic.

Howe—who is a faculty fellow this semester in a Kahn Institute project called “Play”—said the Lego session brought a new element to the Design Clinic course.

“These students have participated in teamwork discussions before,” Howe explained, “But the use of Legos added a twist to the conversation, surfacing some ideas that students hadn’t previously expressed.”

Howe—who is studying the use of play in corporate settings to promote teamwork and idea development—noted that many companies, from small startups to large multinational corporations, are leveraging play to promote creativity and strengthen team dynamics. “Giving people permission to play at work opens doors to new ideas and richer interactions,” she said.

For Howe’s students, the Lego Serious Play workshop provided a creative departure from typical classroom work, and the room remained animated by laughter and lively chatter throughout the session.

“The use of Legos enabled students to think creatively, engage their hands and minds, and have fun,” Howe said. “Who doesn’t love to build with Legos?”

Awards for student-athletes, groundbreaking research, and leadership in the arts, health care and sustainability are among the recent accomplishments of Smith students, faculty, staff and alums. Read about them in the latest People News column.