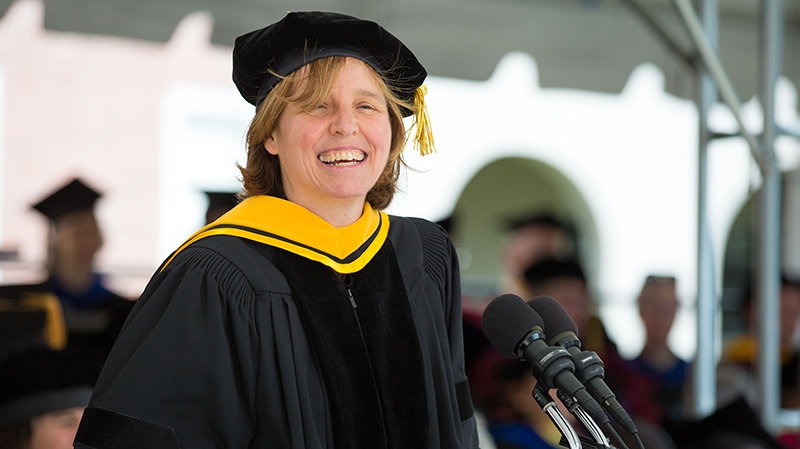 Megan Smith, the United States Chief Technology Officer in the Office of Science and Technology Policy at the White House—and the first woman to hold that post—delivered the address at Smith’s 138th Commencement ceremony, Sunday, May 15, 2016.

Smith, along with five other distinguished guests, received an honorary degree at Commencement.

In September 2014, President Barack Obama named commencement speaker Megan Smith the United States Chief Technology Officer (CTO) in the Office of Science and Technology Policy. In this role, she serves as an assistant to the president. As U.S. CTO, Smith focuses on how technology policy, data and innovation can advance the future of our nation.

Smith is an award-winning entrepreneur, engineer and tech evangelist. She most recently served as a vice president at Google, first leading New Business Development—where she managed early-stage partnerships, pilot explorations, and technology licensing across Google’s global engineering and product teams for nine years—and later serving as a VP in the leadership team at Google[x], where she co-created the company’s “SolveForX” innovation community project. She also co-created Google’s “WomenTechmakers” tech-diversity initiative and worked on a range of other projects. During her tenure she led the company’s acquisitions of major platforms including Google Earth, Google Maps and Picasa. She also served as general manager of Google.org during its engineering transition, adding Google Crisis Response, Google for Nonprofits, and Earth Outreach/Engine, and increased employee engagement.

In the early days of the Web, Smith served as CEO of PlanetOut, a leading LGBT online community that partnered closely with AOL, Yahoo!, MSN and other major Web players. Smith was part of designing early smartphone technologies at General Magic and worked on multimedia products at Apple Japan.

Over the years, Smith has contributed to a wide range of engineering projects, including an award-winning bicycle lock, space station construction program, and solar cookstoves. She was a member of the Massachusetts Institute of Technology (MIT) student team that designed, built and raced a solar car 2,000 miles across the Australian outback.

Smith has served on the boards of MIT, MIT Media Lab, MIT Technology Review and Vital Voices; as a member of the USAID Advisory Committee on Voluntary Foreign Aid; and as an adviser to the Joan Ganz Cooney Center and the Malala Fund, which she co-founded. She holds bachelor’s and master’s degrees in mechanical engineering from MIT, where she completed her master’s thesis work at the MIT Media Lab.