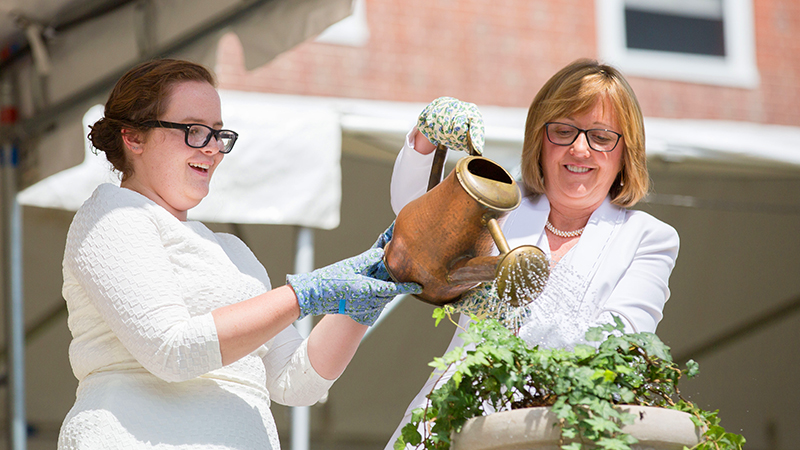 The following prizes were awarded at the Ivy Day Awards Convocation, May 14, 2016.

The Nancy Cook Steeper ’59 Prize to a senior who, through involvement with the Alumnae Association, has made a significant contribution to building connections between Smith alumnae and current students to Karla Sáenz ’16

The Nancy Boyd Gardner Prize, awarded for a single outstanding paper or other project by a Smithsonian intern during the current year for work related to the Smithsonian Internship Program to Laura Grant ’17 and Samantha Page ’17

The Phyllis Williams Lehmann Travel Award to a graduating senior majoring in art, with preference given to students interested in studying art history, especially classical art, at the graduate level to Isabella Galdone ’16 and SallyAnn Garvey-Lumumba ’16

The Tryon Prize for Art to a Smith student for installation, performance, video, sound, digital, internet and interactive art of a high level of artistic expression and presentation to Cherylynn Lima ’18, Arabia Simeon ’19 and Baillie Vensel ’16

The Tryon Prize for Writing to a Smith student for outstanding work in any written form that examines art or ideas associated with the museum to Joan Brunetta ’17J, Brenda Njoroge ’18 and Samantha Page ’17

The Sarah Winter Pokora Prize to a senior who has excelled in athletics and academics to Bethany Claps ’16, Jamie Cyr ’16, Marianna Mapes ’16, Anna Partridge ’16 and Yijin Wei ’16

The Harriet R. Foote Memorial Prize for outstanding work in botany based on a paper, course work or other contribution to the plant sciences at Smith to Noemi Collazo ’16 (posthumously)

The Subul Sunim Prize for the best academic paper written by a Smith or Five College undergraduate for a class taken at Smith on a subject in the field of Buddhist studies to Anarmily Nazir ’17, Hampshire College, and Casey Rau ’16

The Newman Association Prize, awarded annually to a student for outstanding leadership, dedication and service, to Karen Mayorga ’16 and Gisele Pineda ’16

The Connecticut Valley Section of the American Chemical Society Award to a student who has done outstanding work in chemistry, biochemistry or chemical engineering to Anna Carroll ’16 and Isabella McNamara ’16

The American Institute of Chemists/New England Division Prize to an outstanding chemist, biochemist or chemical engineer in the graduating class to Noelia Martinez-Muñoz ’16

The C. Pauline Burt Prize to a senior majoring in chemistry or biochemistry who has shown high potential for further study in science to Ana Emilia Arguello ’16 and Claire Keller ’16

The John Everett Brady Prize for excellence in translation of Latin at sight to Joan Brunetta ’17J; and for the best performance in the beginning Latin course to Marianna Mapes ’16

The George E. Dimock Prize for the best essay on a classical subject to Isabella Levy ’17

The David C. Burres Memorial Law Prize to a senior or an alumna accepted at law school intending to practice law in the public interest to Nicole Mauri ’14

The Juliet Evans Nelson Award to graduating seniors for their contributions to the Smith community and demonstrated commitment to campus life to Karen Chau ’16, Ellen Davis ’16 and Gabriella Zutrau ’16

The Victoria L. Schrager Prize to a senior who has maintained a distinguished academic record and has also taken an important part in student activities to Medina Cecunjanin ’16, Pooja Hindocha ’16, Zuliat Owoade ’16, Gillian Tisdale ’16 and Emma Un ’16

The Ruth Dietrich Tuttle Prize to encourage further study, travel or research in the areas of international relations, race relations or peace studies to Sasha Gayle-Schneider ’16 and Hannah Sachs ’16

The Andrew C. Slater Prize for excellence in debate to Emily Coffin ’16; for most improved debater to Endi Mato ’19; and for distinguished service to the team to Sushmitha Ram ’18

The Mary Maples Dunn Prize, awarded for an essay written in a regular course in the Program in East Asian Studies to Victoria Gilligan ’16

The Sidney S. Cohen Prize for outstanding work in the field of economics to Mallory Durlauf ’16,

The Larry C. Selgelid Memorial Prize for the greatest contribution to the Department of Economics by a Smith senior to Alina Tomeh ’16

The Adeline Devor Penberthy, Class of 1945, Memorial Prize to an undergraduate engineering major for academic excellence in engineering and outstanding contributions toward building a community of learners within the Picker Engineering Program to Bethany Claps ’16 and Dakota Murray ’16

The James T. and Ellen M. Hatfield Memorial Prize for the best short story by a senior majoring in English to Julia Greider ’16

The Norma M. Leas, Class of 1939, Memorial Prize to a graduating English major for excellence in written English to Julia Greider ’16

The Emogene Mahoney Memorial Prize for the best essay on a literary subject written by a first-year student to Hanna Bredvik ’19J, Quynh Anh Giang ’19 and Emily Smith ’19

The Josephine Ott Prize to a junior participating in the Smith Study Abroad Program in Paris or Geneva for her commitment to the French language and European civilization to Catherine Ellsberg ’16, Zhiting He ’16, Rui Huang ’16, Arcadia Kratkiewicz ’16, Meredith Shanoski ’16, Madison Tierney ’16 and Ke Zhang ’16

The Merle Curti Prize for the best piece of writing on any aspect of American civilization to Catherine Bradley ’17, Sarah Goldberg ’16 and Magaret King ’16

The Hazel L. Edgerly Prize to a senior honors history student for distinguished work in that subject to Madison White ’16

The Anacleta C. Vezzetti Prize to a senior for the best piece of writing in Italian on any aspect of the culture of Italy to Keti Lako ’16, Carmen Pullella ’16 and Eva Theriault ’16

The Susan Cohen ’62 and Paula Deitz ’59 Prize in Landscape Studies for excellence in a thesis, paper or project that examines the science, design or culture of the built environment to Mary Kate Fessler ’18, Julia Franchi Scarselli ’18, Laura Thurber ’16 and Sylvie Wise ’17

The Suzan Rose Benedict Prize to a sophomore for excellence in mathematics to Samantha Comeau ’18, Isabelle Fitzpatrick ’18 and Mariya Germash ’18

The Ann Kirsten Pokora Prize to a senior with a distinguished academic record in mathematics to Jamie Cyr ’16, Jordan Menter ’16 and Yijin Wei ’16

The Ernst Wallfisch Prize to a student of music for outstanding talent, commitment and diligence to Gabriella Grange ’16

The John S. Mekeel Memorial Prize to a senior for outstanding work in philosophy to Marianna Mapes ’16 and Gillian Tisdale ’16

The William Sentman Taylor Prize for significant work in human values, a quest for truth, beauty and goodness in the arts and sciences to Cara Tomaso ’16, Xiaozhou Wang ’16 and Yiwen Zhu ’16

S. Mona Ghosh Sinha Prize for the best paper from any academic discipline written by a Smith undergraduate on a subject concerning South Asia to Shabia Furkan ’16 and Tanvi Kapoor ’17J

The Yvonne Sarah Bernhardt Buerger Prize to the students who have made the most notable contribution to the dramatic activities of the college to Samantha Biatch ’16, Jaskirat Kaur ’16, Lixin Lin ’16, Emma Olson ’16, Hannah Sachs ’16 and Josephine Verchomin ’16

The Samuel A. Eliot, Jr./Julia Heflin Award for distinguished directing in the theatre to Jaskirat Kaur ’16

The Denis Johnston Playwriting Award for the best play or musical written by an undergraduate at any of the Five Colleges to: First Prize—Zoe Kriegler-Wenk ’18; Second Prize—Lena Wilson ’16

The Jill Cummins MacLean Prize to a drama major for outstanding dramatic achievement with a comic touch in writing, acting or dance to Siobhan McManamon ’17

The Schuster Van Dyne Prize in Queer Studies, awarded annually by the Program for the Study of Women and Gender for excellent work in queer studies, to Eden Bonjo ’16

The Meg Quigley Prize, awarded annually for the best work in SWG 150 Introduction to the Study of Women and Gender, to Eleanor Adachi ’17, Brianna Barrett ’19, Catherine Hartup ’19, Mia Lloyd ’19 and Monika Song-Ngam ’17