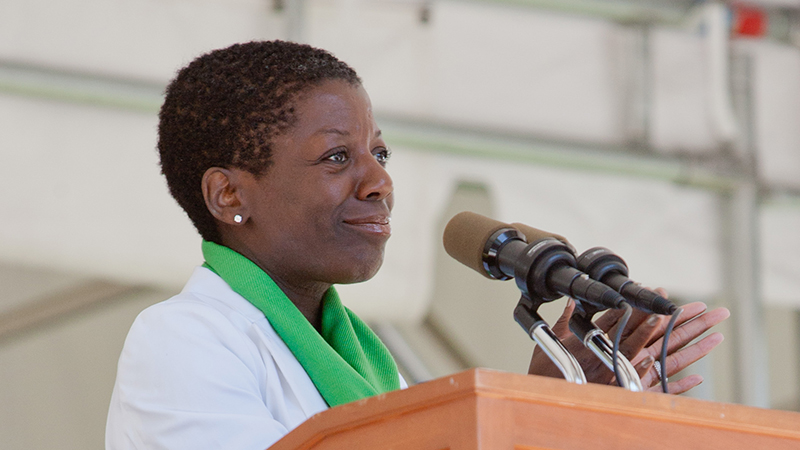 Good morning, President Christ, esteemed trustees and alumnae, the fantastic fellow members of my class of 1987, distinguished guests, family and friends. Please join me in saluting the class of 2012. What a glorious day for us all. I am so thrilled to be here. When President Christ asked me to deliver this address, I was completely honored and totally horrified in equal measure. Honored, because I have always felt deeply privileged and humbled to be to be among the generations of women who went to this great college and represent Sophia Smith’s founding ideals to the fullest. Horrified, because I could not really believe that this was indeed my twenty-fifth reunion. How did that happen?

As I thought of what I might say today from my perspective of what I have learned in the twenty-five years since my own commencement weekend, it seemed most obvious that I might share with you the strength and beauty and power of this incredible sisterhood that you will join tomorrow.

Each day since leaving this campus, I have known what a privilege it was to have come to Smith. I know I owe a great debt to this college, which I try and repay in my work and life each day. I am so grateful, also, for the recognition Smith has given me by saluting me with a Smith medal and an honorary degree. I also know that by living in the world as Smith alum, I represent a profound and radical symbol of the power of educating women in America in 1776 and, perhaps even more significantly in many parts of the world, today in 2012.

But I imagine after four years here in Northampton that you, the class of 2012, already know some of this. You have been here for Convocation, Mountain Day and Rally Day, and perhaps participated in Sophomore Push and Junior Ushers. You have had your Smith experience and have had an opportunity to glimpse at this legacy that you are about to join. And that you know, as I do, what a special part of your life this place will become.

So, perhaps what I can share is something I have just come to understand myself, and it will be no surprise that this comes via an esteemed Smith alumna. A short time after President Christ’s call, I had the occasion to hear the incomparable Gloria Steinem, class of 1956, speak. She was being honored for her unsurpassed achievements and she said on the question of understanding life, “life is one long surprise. You can prepare, but you can't plan...” These words resonated deeply with me, as I realized that in many ways this was a lesson my father tried to teach me in the months leading up to my graduation in 1987.

You see, I came to Smith from New York City. I spent my high school years seeing the city as both my classroom and my playground, first learning about art in museums and galleries throughout the city, experiencing theater in off-off-Broadway playhouses and hearing some of the best musicians of the day play in parks and clubs. I rode the subways to wherever my imagination and heart took me. I was savvy, street smart and fiercely independent. But I did not know how to drive. My New York City high school did not have a cafeteria or a gym. Driver's Ed was a foreign concept. And then I came to Smith and somewhere around my sophomore year, my father mentioned that he thought it was important that I learn how to drive. At this point, I was an art history major, double majoring in African American studies, taking full advantage of the breadth of what this liberal arts education had to offer. American Art—yes! African American Literature—yes! Government—yes! Driver's Ed....???? It just did not happen. And it was not mentioned again until my senior year as I began to discuss my plans with my family.

I imagined graduating immediately, finding the job of my dreams in the museum world, which would pay enough for me to get a fantastic New York City apartment in Manhattan with a view and pay off my student loans. This would be after a post-commencement, around-the-world trip. My father made it clear to me that while he was thrilled and extremely proud of my impending degree, his expectation was that I would also be coming home with a driver’s license.

You see, my father was born in Harlem in 1926 at the tail end of the Harlem Renaissance. He was educated in New York City public schools, had his college education interrupted by the Korean War, served in the US army as an officer, returned, finished his education at Howard University and NYU through the GI bill and started a business in New York City. He lived through a time of significant change in this country and believed deeply in setting goals, having dreams and achieving even in spite of restrictions placed by others. He knew my Smith degree would give me opportunities to pursue my most ambitious goals—goals that he and members of his generation had worked and sacrificed so hard to make possible. He supported my plans, but he also wanted me to be prepared for whatever life might present me. And in the spring of 1987, that meant, for him, that I needed to learn how to drive a car. So that's what the second semester of my senior year became about. Not my plans, but my preparation: the career development office and Driver’s Ed.

So in the exciting but bittersweet weeks leading up to commencement, in the midst of final exams and papers, last parties and tearful goodbyes, I took my driving test—and I failed. I was devastated, because I was a Smith woman who had done everything, achieved everything and there I was in the Northampton DMV in tears. But I proceeded through those final weeks looking forward to my next steps. And I eagerly waited for my family to come to Northampton for commencement to celebrate as your families are here with you now. It was probably today, Ivy Day, that my dad informed me I actually was not returning home with them on Sunday, but staying here in Northampton... to take the driving test again... until I passed! So as everyone left after commencement, cars piled high, I stayed. For three weeks. At driving school and at the Northampton DMV. And, at the end of those twenty-one long days, I took the test again—and I passed! I went back to New York City a Smith College graduate and a licensed driver. What my father wanted for me was to be totally prepared. He knew this degree was going to get me to the places I wanted to go, but the license was going to get me to the places I needed to go. And together, I could and I have gone everywhere. You all are sitting here today with plans just as I had, but what I know now is that it was not so much my plans, but my preparation, that have made these years so significant. Sitting in these classrooms prepared me for an amazing career working with some of the most significant artists of our time. Being taught by this amazing faculty, people who have given their lives to teaching, prepared me for the huge responsibility of a life committed to scholarship and gave me an intellectual ideal to which I aspire. What I learned here about history and culture, prepared me for the man I met and eventually married, creating a family which now spans three continents. Sitting in the hallways of my house late at night prepared me for the fact that whenever, wherever I am in the world or in my life, I can count on a Smith woman for anything at any time.

Gloria Steinem’s words made me realize that my four years at Smith prepared me for all of the richness and complexity and joy that life had to offer me. Life is one long, incredible, fantastic, fierce surprise; you can prepare, but you cannot plan. Class of 2012, what I want to say to you today is congratulations! Welcome to this great, glorious legacy, know that you are going out into to the world able to do anything that you can imagine you can do because... You. Are. Prepared.