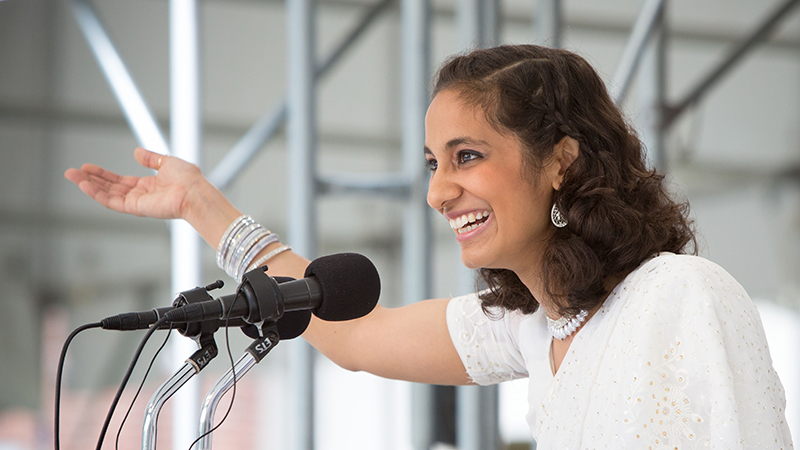 Afreen Seher Gandhi, a member of the Class of 2015, delivered the student speech at Smith College’s Ivy Day celebration on Saturday, May 16.

Good morning, everyone, or, as we say in India, Namaskaar. My name is Afreen Seher Gandhi, and I am a proud alumna of the sparkling class of 2015. Some of you may wonder if I am actually related to the Mahatma Gandhi, the answer is YES...I wish.

I am grateful today, to be able to share my personal story and Smith journey with you. I came to Smith because of my mother, Nighat Gandhi. An avid reader and a writer herself, she first learned about the school reading Sylvia Plath’s The Bell Jar. She had always dreamed of going to a small, liberal arts women’s college like Smith, and when I was accepted here, she knew that this was the best choice for me. And I have never once regretted this leap of faith. As someone in love with theater, I saw Smith as the ideal environment where I could learn about drama as a field of study.

As I took the SATs in New Delhi, I passed by a large board with only one poster on it—a beautiful picture of the amazing New England fall colors, a pond, and a swing, and...yes...Smith College. I knew this was a sign from the universe!

Yet, after my first month at Smith, it seemed like the universe was wrong—or that I had misread the signs. I didn’t feel like I fit in at this prestigious institution with all of its ultra-ambitious, highly intelligent, and frighteningly confident students.

Additionally, I was rejected for every single theatre production that I auditioned for, including a role in which I would have played—a tree. Soon after this 57th rejection, I spoke with Professor Andrea Hairston, class of ’74. She convinced me that instead of trying out for someone else’s productions, I should write and produce my own.

But I was firmly convinced that everyone at Smith was an amazing writer—everyone, except me. Again Professor Hairston encouraged me to write from my own experiences; rather than trying to reinvent Chekhov, Shakespeare, or God forbid, Sophocles! This liberated me. Suddenly, I had many stories to tell! I wrote about going to a convent school, adopting street dogs, and living with daily power outages with temperatures over a hundred degrees. I learned to write as an artist, and grew to love it. Loved it so much, that my junior year, instead of going abroad and opting for a JYA program, I did a JY STAY at Smith College!

Then I met Professor Ellen Kaplan, who told me, “Afreen, aim for that director’s chair.” So I began to write plays that I cared about and cast Smithies who were eager to have their first stage experiences. This lead to my student career in directing seven South Asian productions, which were generously supported by the college.

The most rewarding of these experiences was staging a play that I wrote called Family Duty which was the story of a woman in a middle class Muslim family whose choices are limited due to her gender, religion, and social class. The play addressed issues like the lack of mental health care facilities and the problems faced by religious minorities in India. I could not believe that by my sophomore year, I was not only directing my first play in college, but also staging Smith’s first South Asian play. And because it was based on a short story that my mother wrote when she was in college, I felt like the process had come full circle.

Whether it was setting Macbeth in 17th century in India, during the Mughal Era, comparing European drama to Indian pop culture in Professor Berkman’s class, or four years living in the palatial King house—Yes, we are still “King of the Quad”!—Smith was the first place where I felt comfortable taking creative risks. I could be my crazy, theatrical self, and be surrounded by people who took my passion for the arts as serious work.

Before I came to Smith, I had never experienced what it was like to work part time, budget, and save. But I received an aid package, which I know that Smith alumnae make possible, that taught me what it was like to be financially independent and pay bills. I started with doing dishes in the dining hall but went on to lead a weekly arts and crafts program for Smithies, work as a reunion ambassador, and design a cook book. Yes, Smith taught it all!

When it came to making things happen on campus, Smith was there at every step for me. The faculty, staff and alumnae generously supported all my endeavours:

Smith’s support began when I received my generous financial aid package, and it has never ceased. I still remember suffering from the terror of the blank page when I had to write my first paper in college. But I was able to take my assignment to the Jacobson Center for Writing and work with a writing counselor to craft a thesis statement and an extensive outline, something I had never done before! Thank you Peter Sapira, for being such an amazing writing counselor!

Ever since I became a Smithie, I imagined my sister Suroor as one too. I took a small vow, or kasam, as we say in Hindi. I promised I would never sit on the swing by the Paradise Pond until she came to Smith. Last year, when Suroor, received her acceptance letter and scholarship aid package, both of us danced with joy. On a beautiful sunny fall afternoon, we finally went to sit on the swing together. For me it was surreal. After three years, my kasam had come true. The poster that I had once seen from a distance, had come to life.

Suroor is here today, a proud Smithie, and member of class of 2018. And it is only at an institution like Smith that Suroor can be a physics and studio art double major and pursue her passion for photography and moving particles together—blending two such distinct fields of study.

I cannot forget to thank and acknowledge the love that I have received from my parents and friends. My mother, who introduced me to theater—the innumerable sacrifices she made years ago, have made me and my sister, who we are today. Thank you, Maa. I’m grateful to my father, without whose encouragement and support—Smith and so much else, would have remained a distant dream. And thank you Suroor for always being by my side—it is a blessing to have a sister like you. My entire family is here with me this morning, and this is truly, truly an unforgettable moment.

But, today, I am not here to highlight my accomplishments as an individual. All these amazing experiences have been a collaborative effort through the endless support from the Smith community and the life-long gifts from alumnae. The incredible financial support from the college has enabled me, and now my sister, to receive this invaluable education which otherwise, would not be possible for a family like mine.

Because of your generous support, dear alumnae, today young women from all corners of the world can aim to come to Smith, because they want to and deserve to, without worrying if they can afford to. I would like to give a special shout-out to Ms. Mona Sinha ’88 for supporting and empowering me in so many different ways.

Now that my Smith journey has come to an end, I hope to go to film school for an MFA in directing and production. Recently I received news that I have been awarded the Ruth Dietrich Tuttle, Class of 1909 Prize from Smith. I will use this grant to create a documentary on theater for peace with women and children, in conflict-ridden areas in Pakistan.

Two days before graduation, I was thrilled to learn that I am a Fulbright Fellow, so I will be teaching folk theater and English in Malaysia, starting in 2016. I am thrilled to be one of you, and I am going to take your gifts and the power of Smith with me, wherever I go.

If it were not for Smith, my passion for the arts would have remained suppressed. But with a liberal arts education at an institution that has produced several Emmy, Tony and Academy award winners—I have learned to dream of the red carpet! Today, I am able to envision myself as a director telling stories on the big screen. Thank you, for keeping my dream alive and flourishing. Congratulations to the class of 2015, and I will see ALL of you at the movies!