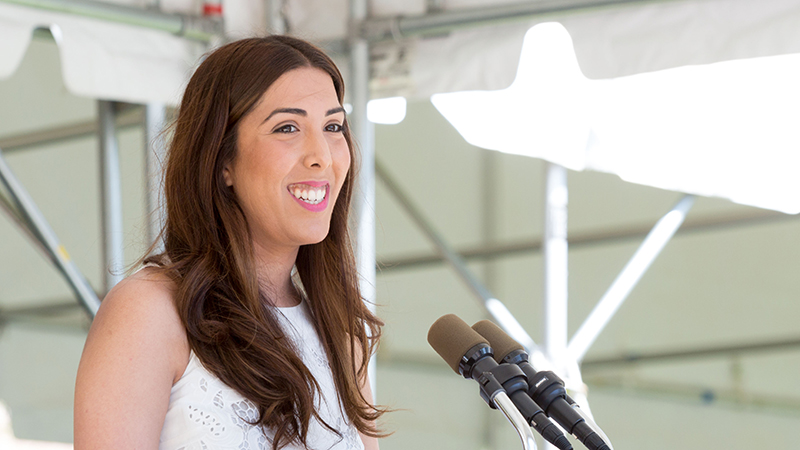 Melody Setoodehnia, a member of the Class of 2014, delivered the student speech at Smith College’s Ivy Day celebration on Saturday, May 17.

Good morning, everyone! My name is Melody Setoodehnia, and I am a proud member of the Class of 2014. It is an honor to share with you my remarkable Smith experience and to express my deepest gratitude to Smith alumnae, faculty and students for an extraordinary journey.

For those of you who know me, you know there are two of me. My twin sister, Jasmine, and I are both Smithies. Our story began in Iran, where I spent my early childhood. It meant the world to my parents to know their children spoke Farsi and understood the rich Iranian culture. But having been educated in the United States, they knew Iran did not offer many opportunities for women.

So my parents made a courageous decision to uproot our family and move to America when I was 9, where my siblings and I enrolled in school knowing only three words of English: Mom, Disneyland and chicken. Despite the emotional and financial hardships we experienced in America, our vocabularies grew as fast as our ambition, and we learned to work hard to secure a brighter future. In many ways, Smith’s mission aligned with our values, and my parents were thrilled about our decision to apply.

But...Jasmine and I were waitlisted. Despite the uncertainty, we visited Smith, where we absolutely fell in love with the campus and left hoping two spots would open up. I remember vividly the morning that we received a call from the college. My dad came running up to our room with a confused look. “They want to talk to you two,” he said. When I took the phone, the first thing I heard was “Melody, Jasmine, it would be our pleasure to extend two spots in Smith’s incoming class.” Jas was in such disbelief that she actually asked the woman if she was joking. But to my relief, they were serious, and so were we when we said, “Yes...Yes, please!”

The second hurdle was concern over financial aid. At the time, my parents were supporting my older sister in college, so sending off two more daughters to a private school was more than overwhelming; it was impossible. Growing up, Jasmine and I hated being grouped as one person, but in this case, Smith’s aid package of two-for-the-price-of-one was a happy exception. Finally, being a twin paid off — literally!

Thanks to the guidance of faculty, I quickly became aware of the rigorous standards set before me. I reached high, but sometimes I fell short. I remember my first midterm in Microeconomics, I was shocked to receive a 70 percent (only a Smithie knows how tragic that is) and panicked when I realized there was a backside to the test that I had left completely blank. When I made my way up to Professor Charles Staelin after class, I fought back tears as I explained what had happened. To my surprise and relief, Professor Staelin said, “Melody, I’m here to test you on what you know, so if you know it, solve it for me right now on the board.” When I did, in an act of fairness, he gave me the full points.

Uncharacteristically, in my sophomore year I decided to enroll in a three-hour drawing class. After a few weeks I realized I couldn’t stay focused for an hour, let alone three. But Professor Elizabeth Meyersohn was so patient with me, suggesting I take breaks every hour. She even brought a mixed tape her daughter had made to help keep our energy levels up. When I recently ran into Elizabeth, she told me she still remembers the seven black crows I drew for my art final, which means a lot to me. Reflecting on that class, I realize if I didn’t learn to take risks in a secure environment like Smith, I would never be prepared for the professional world.

Our junior year, my twin selfishly abandoned me for the London School of Economics. What was I going to do without my other half? But this was my chance to make Smith my own, and the Draper Business Plan Competition was a great place to start. The first entrepreneurship competition for women at Smith offered $20,000 in cash prizes. I had to try. After countless hours of preparation, I pitched my business idea — a matching service for realtors and homebuyers.

When I won first place and $10,000, it was surreal. However, realizing my passion for startups was the true prize. I’m thankful to Tim and Melissa Draper, Class of 1977, for promoting women in entrepreneurship, and for having the chance to meet alumnae, such as Mona Sinha, Class of 1988, and Debby Farrington, Class of 1972, who served as judges.

Though unconventional, I chose to leave Smith for Scotland to study abroad during the fall semester of my senior year. For the first time I learned to enjoy my own company and explore new adventures. I traveled to Italy, Spain, Ireland, Denmark and London, where I had the chance to meet our president Kathy McCartney and saw first-hand Smith’s global presence.

At the end of the semester I met my mother in Instanbul, after which we journeyed back to Iran. It was my first trip back in eight years. I had left a little girl and returned a woman — and not just any woman. I was a Smithie: well-educated and refined, yet hungry as ever for those Iranian kabobs! Because of my mother’s generous spirit, we visited impoverished mothers and contributed small loans to help parents finance their children’s education. I was truly humbled by the strength of Iran’s most undervalued resource, its women.

I am eternally grateful to my parents and to Smith for the transformative experience I have been afforded. But perhaps the most valuable asset I gained during my time at Smith is the network of remarkable women I met here, women whose friendships I will carry throughout my life. After graduation I am moving to New York City to start my career in finance at Citigroup; not surprisingly, my twin will also enter finance, but at Putnam Investments in Boston.

Smith is a gift that keeps on giving, and the alumnae who open-heartedly support students are what make this institution so unique. Thank you all and cheers to the Class of 2014!