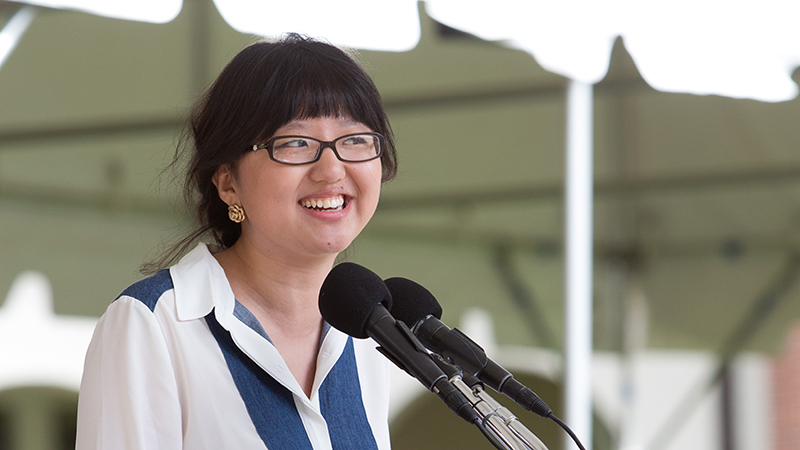 Shuyao Kong, a member of the Class of 2013, delivered the student speech at Smith College’s Ivy Day celebration on Saturday, May 18.

Good morning, everyone, or as we say in Chinese, zaoshanghao. I’m Shuyao Kong, a proud member of Class of 2013. It is an honor to share my Smith experience and to express my gratitude for the significant role Smith alumnae, faculty and students have played in my life.

As an international student from China, the most common question I received for the past four years (including the interview for this amazing opportunity) is whether it is difficult to move from Beijing to Northampton by myself. The answer: yes. It’s always hard to adapt to a completely different culture, but Smith has made this process fun, fruitful, and simply unforgettable. I am here today to thank all of you for making a difference in my life.

My introduction to the power of the Smith network occurred in the summer of 2011, when I interned at a business consulting company in Bangalore, India. Like most newcomers in India, I was overwhelmed. Fortunately, my program manager, Brianna Dieter ’05, helped me adapt to the new environment. She not only helped me understand my role as an intern, but also things like dining in Bangalore, finding a cab in the midst of a dusty suburb, and more importantly, she introduced me to the Smith network in India. Yes, Smith network in India. During my internship, I was honored to participate in a Seven Sisters reunion at a South Indian restaurant. There were three Smithies at the reunion, Brianna, Meghna Prasad ’99, and me. Their experiences in India inspired me because they have brought their Smith education to the world. It was there eating food on a lotus leaf that nurtured my Smith identity.

Among the many alumnae I want to thank for making my Smith experience possible, I especially have to thank Dr. Judy Kuriansky ’68, an internationally respected clinical psychologist, journalist, radio host, and TV commentator. As a psychology major, I want to contribute to the welfare of Chinese people, especially in the face of natural disasters. So, while I was studying abroad my junior in Copenhagen, Denmark, I emailed Dr. Judy to ask whether it was possible to work for her during the January break. Since then, we have worked on several papers about China’s earthquake recovery, presented at United Nations conferences, and on TV shows. What touches me the most is that Dr. Judy cares for me like a daughter.

Apart from individual alumnae, I am also grateful to all alumnae for financial help. Not only did I receive financial aid, but I’ve also received funding for books, conferences, study abroad, and emergency medical expenses when my wisdom tooth hurt during mid-terms. Yet, my story is not unique. Over 60 percent of Smith students receive some form of financial aid thanks to alumnae support. It is you who make everything possible.

While Smith has brought me to the world, I’ve helped bring the world to Smith. As a leader in the Chinese cultural club, CISCO, I have organized panels, cultural events, discussions, and workshops to bring diversity to campus. For example, on the panel, “Everything You’ve Wanted to Ask About China But Were Afraid to Ask,” we openly talked about the one-child policy, freedom of speech, and cultural stigma. Through the discussion, we wanted to provide a new perspective on how China looks today, how Chinese people perceive Americans, and how to break stereotypes and stigmas.

My personal growth cannot be separated from faculty support; they not only taught me book knowledge, but also the value of a liberal arts education. Professor Nalini Bhushan’s Aesthetics class introduced me to the philosophy of beauty, sentiment and taste. The Economics of Presidential Elections, taught by Professor Roger Kaufman, exposed the economic debate underlying President Obama’s and Governor Romney’s campaign last year. English Professor Bill Oram’s Science Fiction class opened my imagination and deepened my understanding of the meaning of humanity. Their teaching has shaped my beliefs, choices, and perspectives of the world around me. I want to give special thanks to my thesis adviser Professor Fletcher Blanchard for his support and guidance during my undergraduate psychology research.

Lastly, I’d like to thank my fellow classmates and friends. I feel so lucky to have known you for the last four years. Your passion, intelligence, caring, and love have made Smith—especially Albright House—a second home for me. I believe in all of you. No matter what your role in the society, you will bring forces of change—whether cultural, religious, political, technological, or environmental. A liberal arts education has given all of us the tools to face challenges in an informed and thoughtful way.

After spending time in the United States, India, and Denmark, I will be moving to Nigeria this September working for IBM. I’m sure people will ask me whether it is difficult to adapt to this new environment. My answer will still be yes, but a more confidant yes, because Smith has equipped me with vision, capability, and passion to pursue life and a career that will make a difference in the world. It is an honor, a pleasure, and a blessing to be a Smithie, and I’m going to carry my Smith pride to every single corner of the world. Thank you.